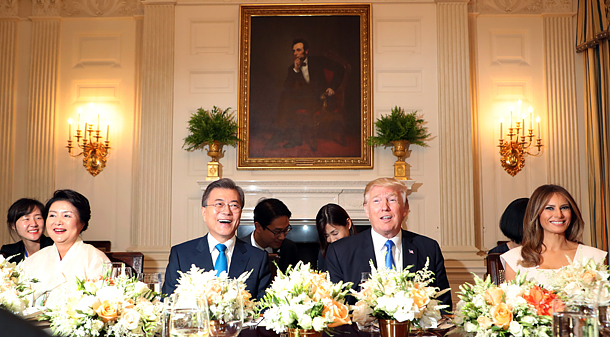 Moon and Trump met for the first time since they both took office earlier this year at a White House dinner to mark the Korean leader’s visit. A wide range of issues, including North Korea and bilateral trade, were discussed during the 110-minute event.

The former dinner, hosted by the U.S. first couple, was the first event for Moon to discuss sensitive pending issues concerning Korea and the United States with Trump. It was a prelude to the presidential summit, scheduled for Friday. Both leaders’ wives, as well as senior aides from Seoul and Washington, also attended.

“Korea and the United States must cooperate for a long time with President Trump,” Moon was quoted as saying at the beginning of the dinner by a senior Korean official. “The ultimate goal is completely resolving the nuclear issue and establishing a peace regime on the Korean Peninsula.”

He also said he supports Trump’s hard-line approach to the North, complaining about a lack of action by previous U.S. leaders. “In the past, [the United States] has said North Korea is an important issue, but took no actual action,” Moon said. “I am in complete sympathy with President Trump’s diplomacy of strong power.”

In the face of North Korea’s rapidly advancing nuclear and missile capabilities, the Trump administration has made “maximum pressure and engagement” its North Korea strategy. Moon’s support for Trump’s approach came as the U.S. Treasury Department slapped new sanctions on North Korea. The measures include cutting off a Chinese bank, suspected of laundering money and financing the North, from the U.S. financial system.

In his opening remark at dinner, Trump also expressed his anticipation to discuss various issues with Moon. “We’re going to have tremendous discussions tonight,” Trump said. “I know you’ve been discussing with our people some of the complexities of North Korea and trade and other things, and we’ll be discussing them all as we progress, and it could be very well late into the evening.”

“It was a great victory, and you did a fantastic job,” Trump said. “A lot of people didn’t expect that, but I did expect it. I thought that was going to happen. So I want to congratulate you very much.”

According to the Blue House, this was the first presidential dinner during a Korean president’s visit to Washington in 11 years. The last dinner was between President Lee Myung-bak and U.S. President Barack Obama.

“The two leaders had a frank and serious talk,” said Yoon Young-chan, senior presidential public affairs secretary. “They had a constructive discussion on various pending issues concerning the Korean Peninsula. But because of the two countries’ agreement, I cannot reveal specifics.”

Yoon said the mood was a little tense at the beginning, but proceeded amicably. Moon and Trump agreed to resolve the North Korean nuclear issue, achieve peace on the peninsula and economic prosperity based on the Korea-U.S. alliance, Yoon said.

“After the dinner, U.S. participants said the event was a great success,” Yoon said. “They said it was an opportunity for the two presidents to start building trust and friendship.”

Trump also summarized the dinner by posting a comment on his personal Twitter account. “Just finished a very good meeting with the President of South Korea,” he wrote. “Many subjects discussed including North Korea and new trade deal!”

A White House official said earlier this week that trade the imbalance between Korea and the United States will be a main topic at the upcoming summit. Earlier this year, Trump also expressed displeasure over the Korea-U.S. free trade agreement and threatened to terminate it.

Negotiators in Seoul and Washington struck a deal to forge the bilateral free trade pact between Korea and the United States in 2007 during the administration of Roh Moo-hyun, the late president considered to be Moon’s political mentor and lifetime partner. Trump, however, called it a “horrible deal.”

Asked about Trump’s tweet, a senior Blue House official admitted that the trade issue was discussed at the dinner. “I cannot elaborate, but various topics we have expected to be addressed were all discussed,” he said.

He stressed repeatedly, however, that the dinner was not an event for formal agreements.