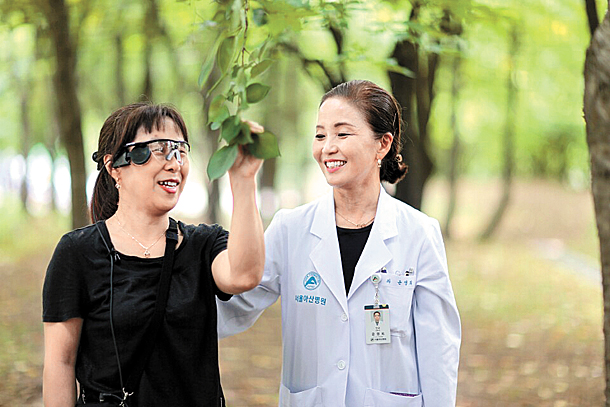 A 54-year-old woman, Lee Hwa-jeong, partially regained her sight a month after an artificial retina implantation on May 26.

By implanting a chip and receiver, the corresponding Argus II retinal prosthesis, or so-called “bionic eye,” allows the patient to see. While there have been over 200 procedures of this kind in the United States and Europe, this was Korea’s first attempt, completed by Yoon Young-hee, a professor of ophthalmology at Seoul Asan Medical Center.

The Argus II looks similar to a pair of glasses. The device registers visual information and transmits it to the retina as electrical stimulation, which the brain perceives as patterns of light.

The first signs of trouble for Lee started 20 years ago. Lee was unable to see the road at night and her ability to view her surroundings gradually shrank and led to blindness by 2007. There are 10,000 people in Korea afflicted with the hereditary degenerative eye disease, retinitis pigmentosa, which breaks down photoreceptor cells in the eyes.

Under the direction of Yoon, Lee underwent the procedure in May 26 and has been in the process of recovery for the past month.

“Before the surgery, I was only able to distinguish between objects by feeling them one by one. If the placement of the object changed, I wasn’t able to find it,” Lee said on Thursday. “My life has changed from feeling around to seeing things. Although it’s still difficult to go about outside independently, the scope of my day-to-day activities inside my home is slowly growing.”

Before the procedure, Lee could only perceive light as a dim presence. Now she can recognize whether a car is passing on the road ahead of her or if there is a person in front of her.

According to an eye examination this week at Seoul Asan Medical Center, her visual acuity was 20/600, meaning she could see at 20 feet what the average person could see at 600 feet. Normal vision, or 20/20, means one can identify the letters of an eye chart from 20 feet away. After a series of rehabilitation sessions, Lee is expected to improve her vision to 20/200.

“I felt a shudder through my entire body when I was able to read the large letters on the eye chart once more,” said Lee. “When my daughter marries, I want to walk up to the platform myself.”

“As this was the first surgery, it took around five hours. The worldwide surgery success rate is 80 to 90 percent,” said Yoon. “Retinitis pigmentosa is a disease where photoreceptor cells disappear so drug treatment cannot be performed. The retina is impossible to transplant as it is nervous tissue, unlike the cornea. Currently, there is only approval for artificial retina implantation.”

“There are many cases where sufferers of retinitis pigmentosa do not go to the hospital after completely losing their sight,” said Yoon. “Now I hope to see them visit hospitals for consultation about the retina implant procedure.”