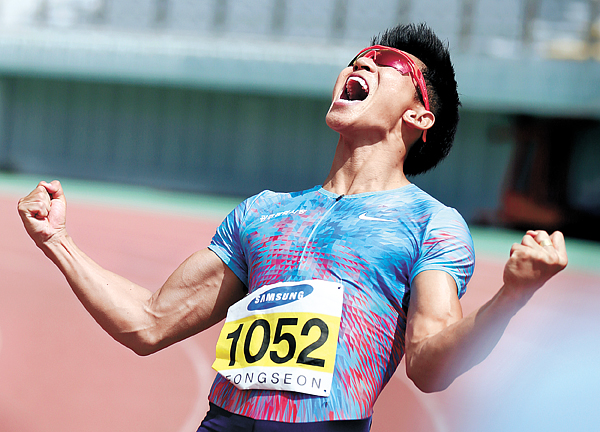 In June 2001, Kim Kuk-young competed in the men’s 80 meter race at the National Junior Sports Festival and finished sixth out of eight runners. Since then, he has been determined to run faster and, 16 years later on June 27, he is now Korea’s top sprinter.

“I was surprised that my time came out so fast,” Kim said.

Throughout his career, Kim has set a total of five records. On June 25, Kim ran the event in 10.13 seconds, but the time was not recognized as the tail wind exceeded the limit of 2 meters (6.56 feet) per second. 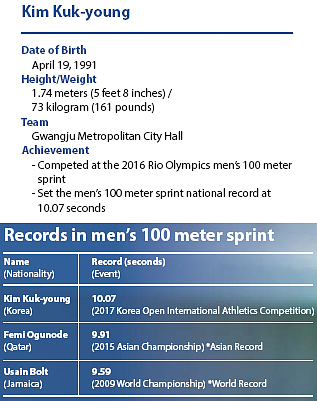 With his victory at the Korea Open and setting Korea’s record for the fifth time, Kim has qualified for the London World Championship in August.

Though he is on the rise now, he had a rough time at the Rio Olympics. Since he is only 1.74 meters (5 feet 8 inches) tall, he is at a disadvantage. But recently, he focused more on his arm swing.

Currently, Kim trains with Park Tae-kyong, former hurdler in the men’s 110 meter event. To improve on Kim’s final sprint, he focused on training for the 400 meters. When training for 200 and 400 meters, a time was set to beat, and if he wasn’t able to do it, then he continued running the distance until he was. This allowed Kim to gain muscular endurance, helping him run at a constant speed throughout the race.

But although he has no competition here at home, Kim has never thought of his work as lonely.

“I am competing against Japanese and Chinese sprinters who are trying to shorten their record to 9 seconds,” Kim said.

This season, a total of six Japanese and two Chinese sprinters have broken the 10.1 second mark.

“I’m still young and have a long way to go,” Kim said. “I need to learn more. After continuous failures, I realize that I’ve gotten stronger.”

This season, his goal is to become the first Korean to run 100 meters in 9 seconds. He also hopes to run that time and medal at next year’s Asian Games in Jakarta.