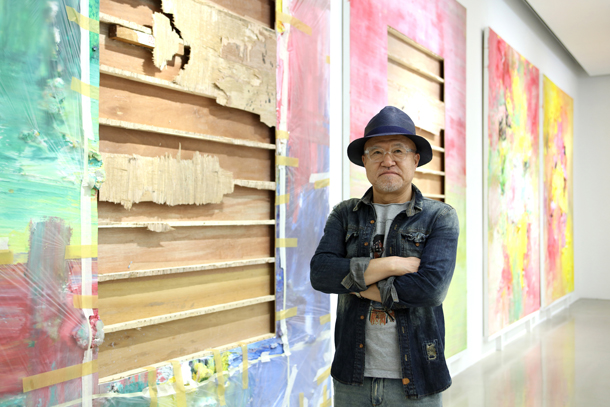 Arario Chairman Ci Kim, who is a businessman, art collector and artist himself, poses with his artworks at Arario Gallery Cheonan in South Chungcheong in late May. [ARARIO GALLERY]

Arario Gallery, one of Korea’s major commercial galleries, opened its relocated, extended Shanghai branch on the West Bund on Saturday, despite the continued boycott by China against Korean arts and culture in response to Korea’s plan to install the U.S. Terminal High Altitude Area Defense (Thaad) antimissile system.

“I have always taken the bull by the horns,” Ci Kim, 66, chairman of Arario Group, told the Korean reporters on Wednesday at the Arario Museum in Space in central Seoul. “If you cannot make it in China, you cannot survive. So I have done something other than just waiting due to the temporary unfavorable conditions.”

This is the style of Kim, a man who wears many hats; he’s a businessman who owns and operates bus terminals and a department store in Cheonan, South Chungcheong; he is an art collector who was put on the World’s Top 100 Art Collectors 2016 list released by Artnet.com, a major global art website ; and he is an artist himself, who now presents diverse works ranging from sculptures and paintings to installations of found objects in his ninth solo exhibition titled “Play the Fool” at Arario Gallery’s Cheonan branch until Oct. 15. 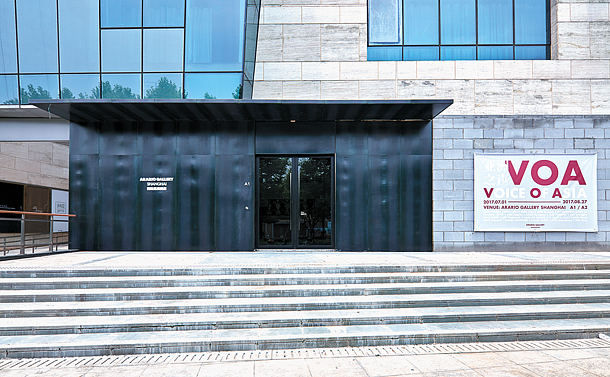 The facade of the Arario Gallery West Bund in Shanghai, which opened on Saturday. [ARARIO GALLERY]

Arario representatives including Kim explained the new Shanghai gallery, at 1,000 square meters (10764 square feet), is three times larger than the previous one on Hengshan Road. Additionally, the riverfront West Bund is an area that the Chinese government has been developing as a hub of art and culture since 2008. Museums like the Yuz Museum and the Long Museum have been popping up and major Western galleries will be opening up branches by 2019. Arario is the first Korean gallery that has opened a branch in the area.

Korean artist Won Seoung-won’s photographic work as part of her “The Sight of the Others” series, above left, and Chinese artist’ Li Hui’s installation work “Dissociative Self” are part of the Arario Gallery West Bund Shanghai’s inaugural exhibition “Voice of Asia.” Won’s works are now on view also at the gallery’s Seoul branch. [ARARIO GALLERY]

Most of the artists in the exhibition are represented exclusively by Arario worldwide. Arario has attached importance to representing artists in exclusive contracts, which is common in the Western art scene but is not in Korea.

“Accordingly, Shanghai is important,” he continued. “Not only because it is a big market with many Asian and Western collectors visiting but also because it is a base for us to find emerging Chinese artists.”

Arario, which has a history of nearly 30 years, opened its first Chinese branch in Beijing in 2005 and relocated it to Shanghai in 2014.