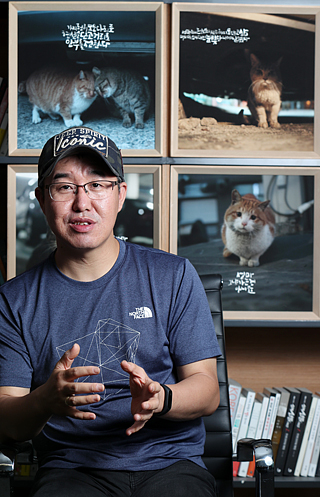 Photographer Kim Ha-yeon, 47, has been taking pictures of stray cats for about 10 years. [JOONGANG ILBO]

Photographer Kim Ha-yeon, 47, has been taking pictures of cats for about ten years, especially stray cats.

In his photos, he captures the lonely and weary looks of cats that have been searching for food while hiding from people. To capture these moments, he lingers around backstreets or looks underneath cars at midnight, places where stray cats are frequently seen.

Kim has had around 40 different exhibitions, showcasing the photos that show the unfiltered lives of cats. Last month, he had photo exhibitions in Seoul, Busan, Daejeon and Okcheon.

Kim has also published a book on the lives of stray cats in 2014 and also appeared in the documentary “I Am A Cat” which was released in June. He has worked as a journalist at a magazine until 2001 and currently works as a photographer at a newspaper in the Seoul area. After getting a camera that he longed for, he said that stray cats have changed his life.

“One day, I took a picture of a cat that was on top of a wall. The tiredness in its eyes made them look similar to humans. The cats reminded me of a devoted parent. That is when I started to take pictures of cats’ expressions,” said Kim. He kicked off his first solo exhibition in 2006. The cats in his works look messy, tired and scared, but they don’t whine or complain about it. They just silently carry the weight of life.

When Kim delivers newspapers at night, he gives food to about 50 stray cats. That is when he takes photos of them. However, there also have been heartbreaking moments. He also takes care of cats that have been killed on the roads. Over the years, he had retrieved the bodies of about 600 dead cats.

Photographer Kim Ha-yeon says that even though he has been taking pictures of cats for about ten years, he still doesn’t fully capture their lives. [JOONGANG ILBO]

“Most stray cats do not look as cute as the Taiwanese cats or Japanese cats in the documentary ‘I Am A Cat.’ Reality is so cruel to them, as they often get killed on the road, suffer from hunger or face violence resulting from misconceptions and hate. After being born on the road, they live for about three years, and after they die, they are treated as waste. But I still think that I have not captured the lives of stray cats fully. I always take photos of cats who have gone through tragic events, such as cats who had to be euthanized. I have cried so much over the years.” Kim revealed that the reason why he documents cats’ lives is not because he loves them, but because of compassion.

“In one of my exhibitions, a monk wrote that ‘feeling compassion, which is a natural human instinct, comes from relating to other beings.’ I was really moved,” said Kim. He continued that he hopes that his works can contribute to moving the hearts of people to feel compassion towards stray cats. He continued that it is only in Korea that stray cats avoid humans and people have to feed them only at night time. “We have to realize that in a country where animals live in pain and abuse, people can’t be expected to be treated any better,” said Kim.