Exhibit offers deep look into the art of family trees

Exhibit offers deep look into the art of family trees 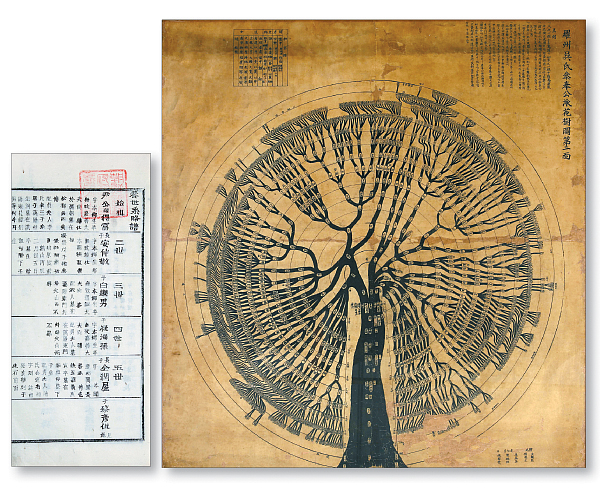 The family with the surname Oh from Naju, has an illustration that lists 1,650 family members over 24 generations written on each twig of the tree, right, and left is a family tree written in more classic graphic style of a family who falls in a social class called jungin, usually merchants. [NATIONAL LIBRARY OF KOREA]

People may expect to find the names of their ancestors written on paper, nicely organized with lines that help people figure out who comes before who in the family. But, some families were more creative and even put the names in the form of a tree on paper. The family with the surname Oh from Naju, South Jeolla, has an illustration that lists 1,650 family members over 24 generations written on each twig of the tree, in order to show how the family spreads out endlessly, according to the library. Some other families have inscribed their records on flat stones to keep them in good condition generation after generation.

The exhibition has 66 items in total which show how the family tree, which started being made during the Joseon Dynasty (1392-1910), was made and developed. In early Joseon, family trees included both male and female children, but the trend seems to have changed over time. Not all are for aristocratic families as some are of those who were merchants.

“Our ancestors emphasized that people who share ancestors are not strangers and should not be strangers,” said the library in a release. “So one way to show their effort in trying to keep the relationship with other family members was to make a family tree.”

The exhibition “Family Tree: Finding My Origins” lasts until Aug. 27 at the National Library of Korea, Seocho District, southern Seoul. It is free to enter. The exhibition is open from 9 a.m. to 6 p.m. from Tuesdays to Sundays. It is closed on Mondays. To get to the National Library of Korea, go to Express Bus Terminal station, line No. 3, 4, 9, exit 5, or Seocho station, line No. 2, exit 6. For more information, go to www.nl.go.kr or call (02) 535-4142.