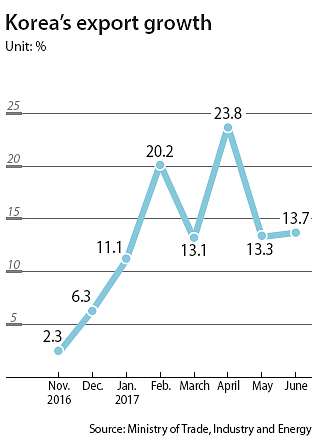 But the momentum could be undercut by the growing pressure Korea is feeling from U.S. President Donald Trump, who is insisting on a renegotiation of the free trade agreement between the two countries.

According to the Ministry of Trade Industry and Energy, Korea’s exports last month hit $51.4 billion, the second highest monthly figure ever, posting double-digit year-on-year growth for the sixth consecutive month. In June, exports rose 13.7 percent compared to a year earlier.

With exports growing for eight consecutive months, hopes for the economy turning around have been rising.

There are expectations that later this month the Bank of Korea will upwardly revise its prediction of 2.6 percent growth for 2017 made in April.

Some are cautiously hoping for growth of around 3 percent, which Korea hasn’t seen since 2014.

Last week, the Korea Institute for Industrial Economics & Trade changed its forecast for this year’s growth from 2.5 percent to 2.8 percent.

The Korea Economic Research Institute had a more positive projection of 2.9 percent.

June’s export growth was largely thanks to growing global demand for semiconductors and ships, which reached all-time records.

Imports last month also showed strong growth. They have been growing in the double digits for six consecutive months.

Imports reported growth of 18 percent to $40 billion, faster than the growth in exports, resulting in a $11.4 billion trade surplus.

But U.S. President Trump’s demand for a “leveling of the playing field” by renegotiating the bilateral trade agreement launched five years ago have raised worries, especially in Korea’s automobile and steel industries.

“The fact is that the United States has trade deficits with many many countries and we cannot allow that to continue,” Trump said during President Moon Jae-in’s first visit to the White House. “And we’ll start with South Korea right now.”

Despite Trump’s claim, Korean autos haven’t been doing too well in the U.S. lately.

According to the Korea International Trade Association, Korea’s automobile exports in the five years between 2011 and 2016 have increased 12.4 percent from $8.63 billion to $15.5 billion.

“If there aren’t huge factors that change the trade environment, Korea’s trade will likely reach the $1 trillion mark for the first time in three years,” said Trade Minister Joo Hyung-hwan.