Mirae Asset celebrates 20 years by looking to the future

Mirae Asset celebrates 20 years by looking to the future 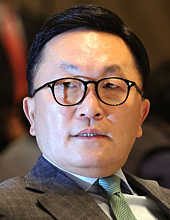 In celebration of Mirae Asset Financial Group’s 20th anniversary, Chairman and Founder Park Hyeon-joo vowed Saturday to improve corporate governance and continue innovation in the market, which Park credits as the core driver behind the firm’s rapid growth into one of Korea’s biggest finance companies.

“To ensure that the company grows into a major player in the global market in the future, we will establish a firm base for this by building a competitive corporate governance structure,” said Park in a celebration ceremony at the Four Seasons Hotel Seoul on Saturday.

“I believe a good firm is one that gives opportunities to its employees. Contrary to a closed organization where opportunities are confined to a select few or the owner’s family members, I will strive to make our company a work place where employees can demonstrate their abilities and feel a sense of accomplishment.”

Mirae Asset Financial Group has received criticism for its murky corporate governance structure, which included circular shareholding among its affiliates.

Park’s family members are major shareholders at several of the group’s 42 affiliates, which also fueled criticism particularly from Kim Sang-jo, the newly appointed chief of the Fair Trade Commission. Kim had pinpointed the company for governance issues in a report released in March last year. To end the controversy, Mirae Asset Capital, the de facto holding company of the group, is said to be looking into issuing new stocks to secure capital needed for reforms.

At the event, Park also promised that Mirae Asset would own “6,000 hotel rooms globally by the end of this year,” in reference to the group’s investment plan of acquiring and developing hotels and resorts worldwide. The group currently owns five hotels.

A living legend in Korea’s finance industry, Park established Mirae Asset Venture Capital in 1997 with a team of eight. Over two decades, the business expanded in size by acquiring firms like Daewoo Securities and expanding its business into other securities, asset management and insurance.

Currently the company operates assets worth 360 trillion ($314.4 billion) in total - 110 trillion won by its asset management arm and 250 trillion worth of client assets by its securities and insurance affiliates.

“Constantly providing quality products and continuing innovation is the only way Mirae Asset can receive credit from clients as an investment firm,” reassured Park.