Running around town looking for a refund

Running around town looking for a refund 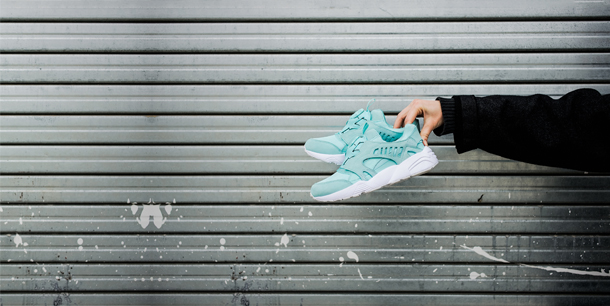 For her five year-old nephew’s birthday, 31-year-old Hwang Sun-young bought a pair of Adidas sneakers at a department store in Gangnam district, southern Seoul. The shoes turned out to be too small for him, so she went to a separate branch of the same department store chain to exchange them.

Hwang was told that she could not return the shoes as they could only be exchanged at the store where she purchased them. Frustrated, she complained to the department store’s customer center, but was told that they could not do anything about rules set by the brand.

“I had a receipt. I don’t understand why I can’t exchange shoes of the same brand in the same department store chain for another size,” said Hwang.

Cases like Hwang’s are not hard to find, with Nike and Adidas repeatedly mentioned in online discussion on the issue.

The fundamental reason why items cannot be exchanged at different branches is because of the way the stores are managed. Most stores fall into one of two categories: branches that are managed directly by the brand’s headquarters and agency stores that are run by authorized individuals who pay royalties to the brand. 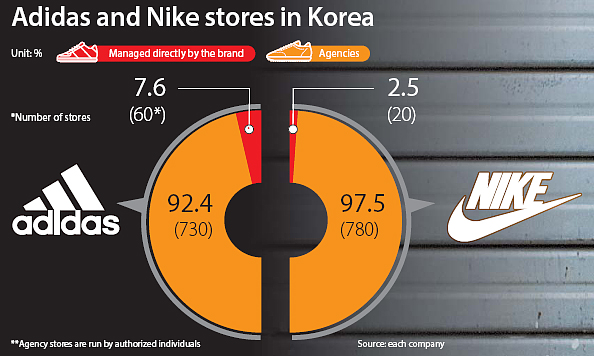 With Adidas and Nike, agency owners purchase products they want to sell at their stores directly from the company. In other words, they use the brand’s name but technically, they’re individual business operators. The relationship between the brand and the agency ends after the goods are purchased, so from the agency’s perspective there is no reason to refund or exchange products that were not bought from them. Most of the branches found in department stores are agencies.

There are currently 800 Nike stores in Korea and only 20 are directly run by the company. Adidas has 790 branches nationwide and 60 of them are managed by the brand.

“Each agency has an owner and they’re the ones that choose the items they want to place on their shelves; so the possibility of stores having the same product is low, which makes it hard to get a refund or exchange products at another branch,” explained a source at Adidas.

A 39-year-old Seoul resident surnamed Han worries about the power the brands have. “The current system means that if a Seoul resident buys a pair of sneakers on a trip to Busan, he or she has to go all the way back if they want to exchange the same model for a different size. Isn’t this big brands overusing their power over consumers?”

But the problem is that among many brands that manage stores in a similar way, Adidas and Nike are particularly stingy about refunds and exchanges. Under Armour, another major American sports brand, also has agencies but they allow exchanges at any store regardless of the point of purchase. This is because agencies remain under the management of Galaxia Corporation, the licensed distributor of Under Armour in Korea. If a product a consumer wants to exchange is not available in one store, the managing company is able to arrange for the item to be sent from another branch.

Refunding reserved flight tickets can also be a frustrating experience for consumers. At first glance, flight tickets are generally categorized into first, business and economy class. But in reality, there are more than 20 grades of flight tickets. For the same economy seat, refund rules may differ according to the internal grading system. Korean Air, for example, divides economy seat classes for international flights into 15 categories. If a consumer requests a refund 50 days before departure, economy seats in one category will be liable for a refund fee of 30,000 won ($26.20), while other seats seemingly in the same class could incur a 110,000 won fee.

Under current legislation, purchasing goods from a supplier is considered consent to follow their rules. If a consumer buys a product at a brick-and-mortar store, they need to follow the rules set by the brand. For example, if a clothing store puts up a sign on the wall saying “Refunds and exchanges not allowed,” it’s unlikely a refund or exchange would be possible, and there is no legal basis to challenge their position.

If a purchase is made from an online store, however, the rules are different. According to e-commerce statutes, shoppers can return online purchases within seven days and get a 100 percent refund. For door-to-door sales, the deadline is 14 days. The rules take into consideration that when making a purchase online the customer has generally not seen the item in person, while with door-to-door sales the purchase may only have been made because of the vendor’s visit, not because the consumer wanted the goods.

“Buying products at brick-and-mortar stores is considered a decision that was made after the consumer thoroughly examining the product, so there are no rules set on when and how refunds can be made” said Park Du-hyun, head of public relations at the Korea Consumer Agency. “Individual consumers need to carefully look into the brand’s regulations on refund or exchange.”