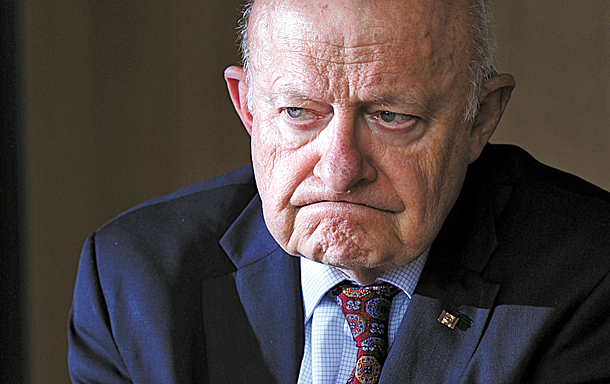 James Clapper, former U.S. director of national intelligence for the Barack Obama administration, said North Korean denuclearization is no longer achievable and that Washington should focus on capping its nuclear and missile capabilities.

Clapper also confirmed, when asked last week in Seoul by reporters from the Korea JoongAng Daily and the JoongAng Ilbo, that this means South Korea and the United States must acknowledge North Korea as a nuclear power.

Clapper, who retired in January after serving six and a half years in his post, said he could attest from first-hand experience in North Korea during his trip there in November 2014 that Pyongyang will not give up its nuclear arsenal.

“Would be nice if they did, would be great if we could figure out some incentive to motivate them to give up their nuclear weapons, but they’re not going to do that,” said Clapper. “That’s their ticket to survival. It’s how they create deterrence against attacks against them, which they are very afraid of, and it’s how they have leverage, how they have face.”

Clapper proposed setting up a diplomatic liaison office in Pyongyang and allowing the regime to set up a similar presence in Washington, or what he calls, an “interest section.” He said he once suggested the idea to the Obama White House but did not specify how the former president responded. The measure, he believes, is the “only path” to a “soft implosion” of the North.

Mentioning this approach during a keynote speech on June 26 at the JoongAng Ilbo-CSIS Forum 2017 at Shilla Hotel in central Seoul, Clapper said the liaison office would accomplish two objectives: serving as a means of regular “in-residence” communication between Pyongyang and Washington and, more importantly, giving North Korea a conduit to the outside world.

North Korea “isn’t going to be interested in any kind of dialogue” on regime change, he said during the interview last Tuesday. “So I just think we need to be more patient, and over time, like years maybe, bring about a gradual change in North Korea.”

A violent overthrow, he added, would force millions of North Korean refugees into China, making it very unappealing to Beijing.

Asked whether his idea of a soft implosion includes regime change or the removal of North Korea’s Kim dynasty, Clapper said it would include “hope for a transition in some other form.”

But the former intelligence chief acknowledged that the Trump administration would not accept his proposal, especially after the death of Otto Warmbier, the 22-year-old American college student who died on June 19, six days after his release from the North in a vegetative state. Warmbier had been held captive for 17 months on charges of subversion.

“It will just harden President Trump and the administration’s attitude about North Korea,” said Clapper. “That’s a terrible, egregious, despicable thing for them to do and it just proves how inhuman and cruel the North Koreans are.”

In November 2014, Clapper visited Pyongyang to secure the release of Kenneth Bae and Matthew Todd Miller, both American citizens.

“I was amazed at the magnitude and depth of paranoia, and the overwhelming sense of siege that seems to prevail among the elite leadership in the North,” Clapper said at the JoongAng Ilbo-CSIS forum. “Everywhere they look, from their perspective as I heard repeatedly, they see enemies who threaten their very existence.”

Clapper says the U.S. realistically has no pre-emptive military options and that attacking the North would be reckless.

“That’s not really plausible,” he said, because “if we were to preemptively attack North Korea, they would automatically respond, and all that artillery and rocketry on the DMZ [demilitarized zone] would be unleashed on Seoul, and there would be great death and destruction if that was to happen.”

On Beijing’s opposition to South Korea’s deployment of the Terminal High Altitude Area Defense (Thaad) antimissile system, Clapper said China “ought to talk to North Korea” about it and “think about what it is that prompted the Thaad deployment.”

Clapper said he did not agree with remarks made last month by Moon Chung-in, South Korean President Moon Jae-in’s special adviser for unification, foreign and national security affairs, who told an audience at the Woodrow Wilson Center in Washington during a forum that if North Korea suspends its nuclear and missile activities, South Korea could consult with the United States to scale down joint military exercises and reduce the deployment of U.S. strategic weapons to the South.

The Blue House scrambled to distance itself from the assertion, saying it issued a “warning” to the special envoy and told him that “his remarks are not helping Korea-U.S. relations.” The envoy said the opinion was his own personal view.

“Curtail the exercises? I don’t agree with that,” said Clapper. “The exercises are intended to be defensive. They are not offensive. They don’t practice invading North Korea.”

The real question, he said, is “If we stop the exercises, what will the North Koreans do?”