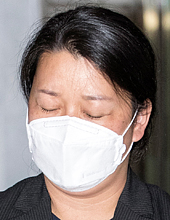 Scrambling to contain the fallout from its biggest political crisis, the People’s Party on Sunday questioned Ahn Cheol-soo, the party’s former presidential candidate, on his possible role in a phony audio tape scandal that has rocked the party.

As of press time Sunday, the party of 40 lawmakers had yet to make public any details of the face-to-face questioning - including its time and location - of the man who practically founded the party early last year.

The party’s move on Sunday illustrated a deepening sense of crisis among its lawmakers - the third largest group in the legislature - as the scandal over a fake audio tape used to smear the candidacy of Moon Jae-in dominated the news last week and sent its approval ratings to rock bottom.

“The people and the People’s Party have both been deceived,” said Park Joo-sun, the party’s interim chief at a press briefing at the National Assembly on Sunday. “I will lay bare the truth no matter what. Only finding the truth can save the party.”

The scandal sent the party’s approval rating down to 5 percent, the lowest since its founding in Feb. 2016, according to Gallup Korea, which conducted a poll between Tuesday and Thursday of 1,005 adults nationwide.

The ongoing scandal involves a phony audio tape and fake three-way group chats created by Lee Yoo-mi, a member of the People’s Party, who was arrested last week on charges of spreading false information.

In the phony audio tape allegedly made by Lee, a person claimed that Moon’s son Moon Joon-yong landed a coveted full-time job at the state-run Korea Employment Information Service (KEIS) in late 2006 because his father was senior presidential secretary for civil affairs.

The voice on the tape said that Joon-yong applied for the position after he was told to do so by his father.

The voice on the tape claimed to be a friend of Moon Joon-yong from when he studied design and technology at the Parsons School of Design in 2010.

It turned out the voice was that of Lee Yoo-mi’s brother who was pretending to be a Korean student who went to the Parsons School.

Lee also allegedly captured shots of a three-way group chat that she alleged involved herself and two of Joon-yong’s friends from Parsons.

One person says in the chat that Joon-yong had talked about a “free pass” that allowed him into KEIS. The People’s Party said on Wednesday that Lee Yoo-mi typed all three parts in the chat using three different mobile phones.

The former Parsons student whose identity was stolen stated over the weekend that she had never even met Moon Joon-yong during her years there. She said she would make criminal complaints against Lee Yoo-mi, including for defamation and illicit use of her identity.

Now people are asking whether Lee colluded with other party members to create the fake materials and spread them. Lee provided the tape and the captured screen grabs to Lee Jun-suh, a former member of the party leadership, who gave them to Ahn’s campaign headquarters. Without confirming their veracity, the Ahn campaign held a press briefing on May 5, just four days before the election, lashing out at Moon and his son by citing the audio tape and the captured screen grabs of the three-way chat.

Prosecutors are looking into whether Lee Jun-suh instructed Lee Yoo-mi to make the fake materials. If he had, he will be questioned as to whether he received order from higher up the chain of command.

If anyone higher up the chain of command is revealed to have taken part in Lee Yoo-mi’s scheme or pushed the May 5 press briefing knowing the allegations were false, the People’s Party’s survival could be at risk.

Interim party chief Park Joo-sun commented last week if that was to be the case, his party “should be disbanded” for following “criminal politics.”

Lee Jun-suh and the People’s Party have so far denied involvement and said Lee Yoo-mi acted alone. The People’s Party asserted that Lee Jun-suh insisted that Lee Yoo-mi provide more evidence to back up her claims. It also said Lee Yoo-mi testified to prosecutors she had acted alone without consulting any party officials, saying it learned this from Lee’s legal defense team. The party’s claim was quickly refuted by Lee’s lawyer, who said he never shared that information with anyone.

While Ahn Cheol-soo, who was defeated by a nearly 20 percent margin in the May 9 election, was questioned Sunday, he has yet to issue an official statement on the scandal.

Ahn conveyed a message through former party spokesman Kim Kyung-rok on Friday, saying he takes the unfolding scandal “very seriously” and that he “hopes for a thorough investigation” by prosecutors.