With the PyeongChang Olympics only seven months away, Do Jong-hwan, the new sports minister, suggested that North and South Korea create a joint women’s ice hockey team. Shortly after that, President Moon Jae-in and Thomas Bach, president of the International Olympic Committee (IOC), seemed positive about the idea, as it ties in perfectly with the theme of the Olympics, peace.

Although this issue directly affects the team, they were never told about the plan. The players don’t think a joint team will ever happen, but once the suggestion was announced, the team got into the habit of surfing the internet for any updates on the issue. 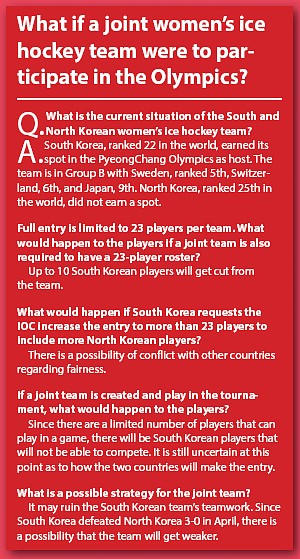 “When we first heard about the news on June 20, none of the players believed it,” Han Soo-jin, forward, said. “We started to get serious about this issue when it was getting reported continuously and when President Moon Jae-in mentioned it. We tried to stay calm, but it’s not that easy.”

In Korea, there are no professional women’s ice hockey teams or college teams. The players train everyday but only receive 60,000 won ($52) daily, about one million won a month. Despite the low wage they’ve been receiving as part of the Korean women’s ice hockey team, they didn’t give up with the dream of playing at the Olympics.

“Han Soo-jin, who studied piano at Yonsei University, gave up her dream of becoming a pianist to play at the Olympics,” Park Jong-ah, forward, said. “And I moved to Seoul by myself from Gangneung, Gangwon in eighth grade to play ice hockey. Just like that, all our players worked their hardest only for the dream of getting to the Olympics.”

“We’re like a family now,” Han Soo-jin said. “Even if I make the team and have teammates cut from the team, I think I’ll be very mad.”

Even if the government requests the IOC increase the limited entry to include a certain number of North Korean players, there may be further problems with competing countries.

“That will raise the issue of fairness,” Jo Susie, forward, said. “And only an entry of 22 players is accepted to a game. That said, there will be players that won’t get to play at the Olympics.”

In addition, it still remains a question whether Sarah Murray, head coach of the South Korean women’s ice hockey team, will coach both teams.

North Korea, which was ranked as high as tenth in the world until the early 2000s, has gotten weaker recently, whereas South Korea has shown significant improvement, defeating North Korea 3-0 at the International Ice Hockey Federation’s World Championship Division II Group A game.

“There’s a clear gap in skill between the two teams,” Jo said. “Since there are only seven months remaining until the Olympics, it’s hard to work together as a team.”

Recently, the JoongAng Ilbo, an affiliate of the Korea JoongAng Daily, conducted a survey regarding the issue of a joint team and 95 percent of respondents, 1125 out of a total of 1182, did not agree with the idea.

“We were thankful that the people understood how we felt,” Jo said. “We want sport to be looked on purely as sport.”