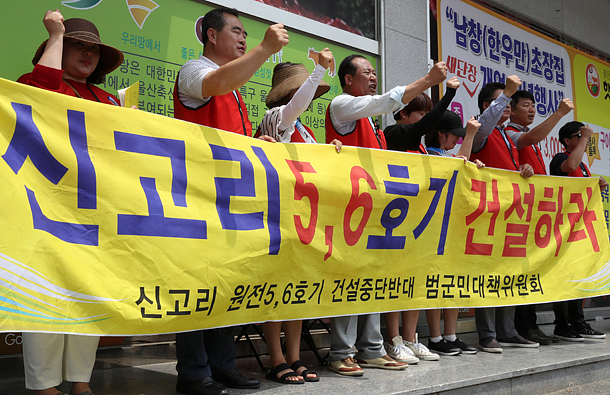 Starting with the nuclear reactor Kori 1 in 1977, eight nuclear power plants have been constructed in Korea since 1989. They were not built with Korean technology but were products of Westinghouse of the United States and Candu of Canada. Back then and now, nuclear power plant design and construction requires advanced technologies.

Westinghouse and Candu had no intention to transfer technologies to Korea. Korean engineers copied the nuclear reactor blueprints to learn the technologies, while American and Canadian experts said they would never understand.

Engineers spent nights in the field learning the technologies. But they didn’t stop there. In 2005, the OPR (Optimized Power Reactor)-1000, the Korean standard, was created. It is an indigenous model with 1,000-megawatt capacity, 40-year lifespan and an anti-earthquake design that can withstand a 6.5 magnitude earthquake. There are ten such reactors in Kori, Wolseong, Hanbit and Hanul.

The new administration has stopped the construction of Shin Kori 5 and 6 and will conduct a survey to decide their futures. Shin Kori 5 and 6 are third generation reactors, called APR (Advanced Power Reactor)-1400. A more advanced model from OPR 1000, the Shin Kori has a 1,400-megawatt capacity, 60-year lifespan and antiearthquake design that can withstand 7.0 magnitude earthquakes.

In December 2009, Kepco won an $18.6 billion deal to export four APR-1400s to the United Arab Emirates. In the international open bidding, Korea won the bid over France and the United States. The deal is equivalent to exporting 1 million Hyundai Sonatas or 180 300,000-ton oil tankers. Shin Kori 3, which is already complete, Shin Kori 4, Shin Hanul 1 and 2, which are 90 percent complete, are all APR-1400 models.

The phaseout of nuclear power was President Moon Jae-in’s campaign promise. No one would oppose the policy to reduce nuclear power generation and shift to environmentally friendly, renewable energy. Instead, consumers may have to pay higher prices for electricity. Considering the decommissioning and environmental cost of nuclear reactors, the total social cost of nuclear energy is considerable and the higher electricity price would offset the total cost.

Thanks to nuclear power plants and coal thermal power generation, Korea’s electricity costs are still relatively cheap compared to major countries, and the affordable price level has caused a waste of electricity.

What we need to take into consideration is nuclear power technology in an industrial sense. Korea is the fifth nuclear power plant exporter, after the United States, France, Russia and Canada.

If Korea stops constructing nuclear power plants, it will be hard to export nuclear plants to other countries. The industry would shrink, and related workforce would leave. Korea is struggling from a shortage of jobs and future industries. We need to make the pie bigger so that everyone can have a bigger piece.