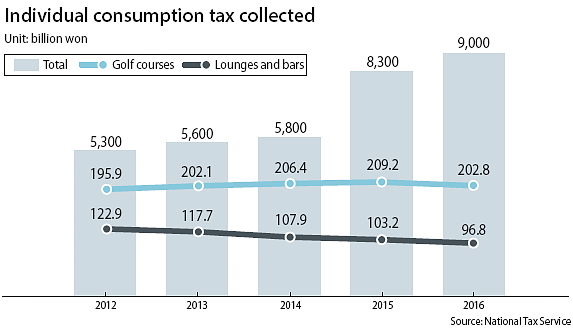 Tax collected from golf courses and bars has dropped noticeably following the introduction of an antigraft law last September, according to a government report released Monday.

According to the National Tax Service, the agency collected 233.3 trillion won ($203.4 billion) in taxes in 2016, up 12.1 percent from the previous year. Corporate tax collection rose by 7.1 trillion won from a year ago to 52.1 trillion won.

Although the amount the government collected through individual consumption tax rose 9 percent from the previous year, the money coming from golf courses and bars dropped.

“The individual tax collected from lounges and bars continue to fall and the money collected from golf courses dropped for the first time in the country,” said Choi Young-joon, a director at the NTS.

The NTS data showed that the individual consumption tax collected from golf courses dropped 3.1 percent year on year from 209.2 billion won in 2015 to 202.8 billion won.

According to the Korea Golf Course Business Association, the number of people playing at 486 golf courses rose 3.7 percent year on year to record 36.7 million in 2016. However, the number rose significantly at public golf courses, which offer relatively cheaper green fees when compared to private ones. The association said golfers at public courses jumped 20.5 percent, while the number at private courses fell 12.9 percent.

The amount of individual tax collected from lounges and bars fell for the fifth consecutive year, from 103.2 billion won in 2015 to 96.8 billion won last year. It was the first time that the amount has fallen below the 100 billion won level.

The Improper Solicitation and Graft Act, often referred to as the Kim Young-ran law, limits gifts and entertainment given to public officials. They cannot accept meals costing more than 30,000 won, a gift worth more than 50,000 won or more than 100,000 won between cash and gifts for a wedding or funeral.

According to the report, the number of business operators rose 2.8 percent year on year from 6.7 million to 6.88 million and those who opened businesses for the first time increased 3 percent from 1.19 million to 1.23 million in the same period.