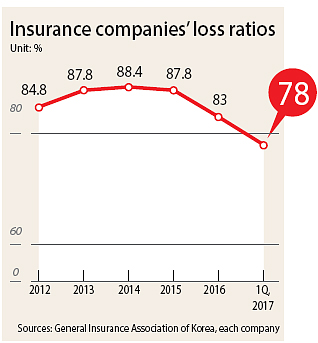 Insurance companies are lowering premiums for drivers as their loss ratios fall and profitability rises.

“We decided to lower premiums to provide benefits to customers as our loss ratio improved significantly,” a spokesman from Hanwha said.

Insurance companies calculate loss ratios by dividing their total losses by the total amount of insurance premiums they collected. If the amounts are equal, the ratio is 1 or 100 percent, and the company has made no profit. Hanwha said its loss ratio was 78.2 percent in May, which was 6.7 percentage points lower than the 84.9 percent ratio recorded a year earlier.

Generally, the industry believes a reasonable loss ratio is between 77 percent and 78 percent. Ratios reached as high as 88.4 percent in 2014, but dropped to an average 78 percent in May. This was the first time the average fell below the 80 percent level in Korea.

The loss ratios at major insurance companies such as Samsung, Hyundai Insurance and Meritz all hovered at the 70 percent level during the first three months of the year. The auto insurance business is becoming more profitable than before.

Korea has a high number of traffic accidents compared to other countries in the OECD. Profits are now rising because the companies expanded benefits offered to customers who drive less and don’t have accidents through special premium programs. Many drivers signed up for them.

“We started to give 40 percent discounts to customers who drive less, or 18,000 kilometers [111,184 miles] a year, and customers that signed up for such programs rose from 57.1 percent of the total to 71.2 percent,” said a spokesman from Hanwha.

The companies are competing by offering additional discounts for people who drive less. They are less likely to have accidents.

Critics say insurance companies give discounts to “good drivers” and rake in the profits from those who have to drive a lot and put themselves at risk of having accidents. They suggest the government and financial regulators take action to make the insurance companies more fair.

“Some insurance firms don’t allow drivers apply for insurance if they had many accidents or drive trailer trucks,” said Kim Sang-jo, chairman of the Fair Trade Commission earlier this year. “If this is due to collusion between the insurance companies, it is a violation of fair trade regulations.”