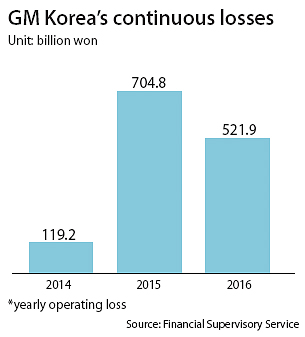 GM Korea asked its labor union to be reasonable in negotiations over wage and working environment conditions, citing the company’s troublesome domestic sales and General Motors’ latest push to restructure its global business.

Senior officials of GM Korea sent an email to employees on Friday explaining that “how we manage the wage negotiation this year will have a huge influence on GM Korea’s position in General Motors’ global business.”

The email also said “As you might all know, General Motors has been restructuring its global business based on profitability and business potential. Selling Opel is a prime example. ... GM Korea has been recording a big operating loss for the past three years and it is important that we proceed the negotiation in a constructive way.”

GM Korea and its labor union started its annual wage negotiation session on May 23. It held its 11th session on June 29.

GM Korea’s labor union, which is part of hard-line umbrella union Korean Metal Workers’ Union, asked the company to raise its monthly base payment by 154,883 won and adjust the incentive payment rate to 500 percent. The union also asked their payment system to shift from the current hourly payment system to a monthly payment system which would guarantee workers their pay checks regardless of the operating rate of production plants.

The company made it clear, however, that some of their requests will not be accepted.

“Because of the uncertainties, requests considering [reducing the working hours] in the two-shift system and the shift to a monthly payment system will not be taken forward for further negotiation,” the email said. “Nonetheless, GM Korea management will put our best efforts into securing a production portfolio and enough volume so that the company’s capacity can be raised to its best,” it added.

The company-wide email comes amid mounting concern that its American headquarters might scrap the Korean business because of unprofitable performance.

Meanwhile, GM Korea President and CEO James Kim announced his resignation on Monday. He will expand his role as chairman and CEO of the American Chamber of Commerce in Korea, the company said, adding that the resignation is not related to GM Korea’s latest sales drop. His successor has not been appointed.