Shipbuilders come roaring back in first half

Shipbuilders come roaring back in first half 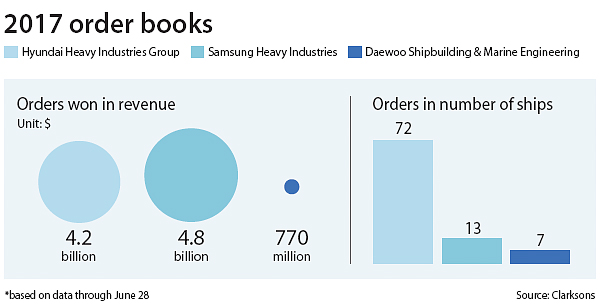 Korean shipbuilders signed the most orders of any nation in the first half of this year, beating the Japanese and Chinese.

According to British market research firm Clarksons Research, Korean shipyards inked orders for 2.56 million compensated gross tons (CGTs), or 34 percent of all ship orders made during the January-June period. That amount is more than double the orders they won in the first half of 2016.

It was the first time in five years Korean companies reclaimed the crown. China snatched it away in 2012 and maintained it ever since.

Last year when global shipbuilders were struggling for new business, the group only inked orders for 13 ships worth a billion dollars. Considering the three affiliates set a 2017 goal of $7.5 billion in new orders, they have reached 60 percent of that target.

New orders were led by growing demand for oil tankers. Among 72 new orders inked by Hyundai Heavy Industries, 60 were for oil tankers. The company is particularly strong in building very large crude carriers (VLCCs), capable of carrying over 300,000 tons of oil. Among 27 new orders made globally, Hyundai affiliates took 14, according to data accumulated by Clarksons.

Demand for liquefied natural gas (LNG) carriers also increased during the year as more countries and companies look for greener fuel. Korea has been a leader in that segment. Among 12 LNG orders made, 10 were given to Korean shipbuilders.

Under International Maritime Organization emissions regulations that come into effect by 2020, more orders for LNG-fueled ships as well as LNG carriers are expected, a spokesperson from Samsung Heavy Industries said.

The rest of 2017 looks good for Korean shipbuilders.

Hyundai Heavy Industries said it received letters of intent for 18 more ships including orders for LNG carriers. Final contracts for those ships are likely to be signed starting this month.

Samsung Heavy finalized a deal to build two shuttle tankers, a type of oil tanker, for Singapore’s AET Tankers, on Monday and is also looking forward to signing additional orders with U.S. engineering company SeaOne Caribbean for 12 ships worth $1.5 billion.

“The shipbuilding market is expected to continue to recover in the latter half of this year and throughout 2018,” said Lee Jae-won, an analyst from Yuanta Securities. “However, market recovery is not likely to be explosive.”