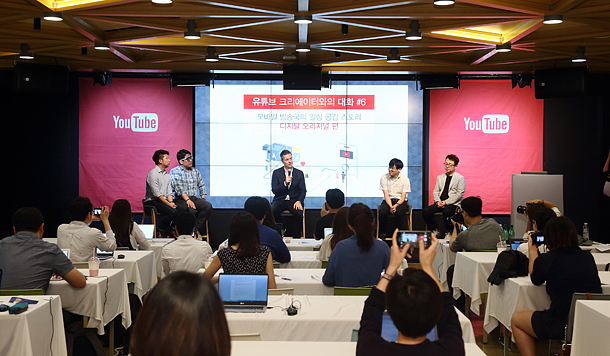 Korea’s four leading web production houses gathered Monday at a Google “Conversation with YouTube Creators” event to discuss the web content market, which has grown rapidly in recent years and is evolving rapidly.

In the past, most entertainment content like drama series or sitcoms were produced by major television broadcasting stations, which in Korea were KBS, MBC or SBS.

With the proliferation of media platforms like YouTube and the increased use of smartphones, consumption of content has shifted from televisions to online or mobile devices, and production houses that focus on online and mobile media platforms have arisen.

“In Korea, we’re seeing so much great content being produced here - it is not just being produced by big traditional studios and pop star celebrities like Big Bang but by start-ups and so-called ‘mobile-first broadcasters,’” said Robert Kyncl, YouTube’s chief business officer, at the event held at Google Campus Seoul in Daechi-dong, southern Seoul on Monday.

Four companies invited to speak at the event were MakeUs, 72 Seconds, WhyNot Media and Mobidic. All of them produce series in various genres including comedy, web dramas and variety shows.

A common sentiment at the meeting was that what matters most is the quality of the content, rather than the medium that delivers it.

“I started working in mainstream media when television was still the dominant distribution channel for entertainment content,” said Park Jae-yong, the executive chief producer at Mobidic, which is SBS’s mobile content production team. “For us, Mobidic is sort of an announcement that SBS is no longer just a television broadcasting company, but a distributor and creator of content.”

Mobidic has a mainstream media parent. The other three start-ups appeared online over the last four years, specializing in videos of two to three minutes on video platform sites.

For example, 72 Seconds became famous for a hit web drama series of the same name. Its unusual format: 72-second long slices of the life of an ordinary young man in his 20s.

As the series gained an audience, the production houses expanded into videos that run around ten minutes. Today, videos created by the four houses are viewed by at thousands of people on YouTube and sometimes by almost a million.

Now that they have established fan bases, the next challenge for the production houses is to find a stable revenue model. When asked where their money comes from, the four companies gave different answers.

“For now, advertising fees are a core source and what should be done foremost is to understand our value from brands’ perspectives, use that understanding to persuade advertisers and make that model continue on,” said Jang Jun-yun, marketing director for MakeUs.

Other revenue sources mentioned were sponsorships, product placement ads, selling merchandise with the companies’ logos, partnerships with outside companies and offering content for a fee.