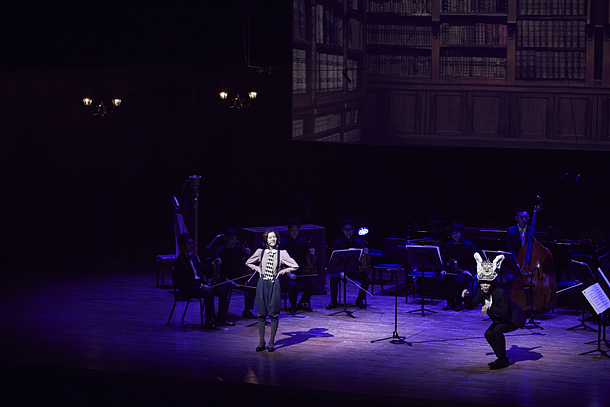 Instead of calmly taking the stage while the audience greeted him with applause, violist Richard Yongjae O’Neill donned a rabbit hat and hopped his way to center stage. At the sight, the audience, including a large number of children, burst out into laughter. The musicians on stage, including O’Neill, waited patiently for the laughter to die down so that they could start the “Ditto in Wonderland” concert on Sunday at the Concert Hall of the Seoul Arts Center in southern Seoul.

Usually chamber music concerts require audience members to show the highest decorum. Even the slightest noise can perturb those with sensitive ears in concert halls that maximize acoustics.

But classical music ensemble Ditto’s 10th anniversary concert on Sunday presented a totally different ambience to regular chamber music concerts. The audience laughed and giggled throughout the concert, but they were all happily forgiven as it was what Ditto had intended.

In fact, that is the reason why Ditto’s music director and violist O’Neill created the ensemble 10 years ago - with the purpose of making “chamber music fun and friendly to all.” The Sunday concert was definitely “fun and friendly” for the audience.

Using the “Alice in Wonderland” motif, Ditto collaborated with actress Han Ye-ri and stage director Kim Min-jeong, who is known for her work with musicals including “Hedwig” and “Spring Awakening.” Unprecedented for a chamber music concert, the performance included acting and projections on the stage backdrop.

The story of “Alice in Wonderland” was retold through familiar pieces starting with Mozart’s “Eine Kleine Nachtmusik, K. 525,” moving on to Tchaikovsky’s “The Nutcracker Suite” and ending grandly with Camille Saint-Saens’ “The Carnival of the Animals.”

But this wasn’t a concert just for kids. When the ensemble began playing, they became serious classical musicians, bringing a quality music experience to the audience.

“It was a refreshing experience,” said Park Sun-mi, 40, who came to the concert with her 10-year-old son. “I am so familiar with the music and Ditto performed it superbly.”

The show will be performed again next month, this time with violinist Zia Shin taking the lead as the concert master. Shin will be accompanied by Mun Tae-guk on cello, Kim Han on clarinet, Berioza duo on two pianos and the Ditto chamber orchestra. The concerts will take place at the Sejong Center for the Performing Arts, central Seoul, at 5 p.m. on Aug. 19 and 2 p.m. on Aug. 20.