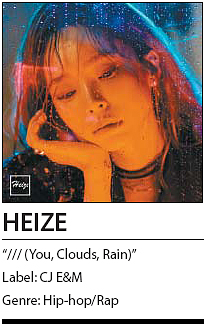 Shortly after its release on June 26, “Don’t Know You,” the lead single from Heize’s latest EP, soared to the top of the charts and stayed there for more than 24 hours, an impressive feat in the era of real-time charts. The rapper beat out tough competition from girl groups such as Mamamoo and Blackpink and chart behemoth G-Dragon to claim the spot.

Although Heize became known to the public as a semi-finalist on the all-female hip-hop audition program “Unpretty Rapstar 2” in 2015 as a rapper, this album really shows off her singing abilities.

However, she does manage to show glimpses of her rhyming abilities on “Don’t Know You,” going bar-to-bar with Los Angeles-based rapper Nafla.

Out of the album’s five tracks, “You, Clouds, Rain” is a standout. Although sung quietly, the plaintive lyrics along with a powerful guest verse from one of the best vocalists in the country, Shin Yong-jae, makes the song perfect for a rainy, sentimental day.

Soon after the album became available, “You, Clouds, Rain” surpassed the lead single and hit number one on major domestic charts.