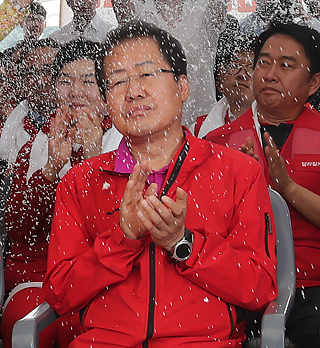 Hong Joon-pyo, former presidential candidate of the Liberty Korea Party, and former South Gyeongsang governor react nonchalantly on Monday when Hong was elected chairman of the party at the convention in Namyangju, Gyeonggi. [YONHAP]

The largest opposition Liberty Korea Party (LKP) elected Hong Joon-pyo on Monday as its new party leader, putting its former presidential candidate back to its top position less than two months after his defeat in the May 9 election.

Hong, a former career prosecutor known for his aggressive rhetoric, was elected leader of the second largest party by winning 65.7 percent of the votes, combined from party members and the general public. Rep. Won Yoo-chul came in a distant second with 22.9 percent, while Shin Sang-jin won 11.2 percent.

“I have received a solemn order from party members and the general public to rebuild this crumbling party,” said the former presidential candidate during a press briefing at the party headquarters in Yeouido, central Seoul.

The LKP has 107 of the National Assembly’s 299 seats, and Hong now faces a difficult task of reviving the party whose approval is at an all time low of 7 percent, according to the latest poll by Gallup Korea conducted between Tuesday and Thursday.

The LKP also faces competition from the Bareun Party, which was launched in January by former LKP members who had defected from the LKP over pro-Park Geun-hye elements within the party.

Regarding the Bareun Party, Hong predicted it would be absorbed by the LKP ahead of the local elections scheduled for next June in the name of unifying conservative forces.

Hong must therefore revive the party’s approval rating in the months leading up to the June election.

If Hong fails to do so, lawmakers still loyal to former President Park Geun-hye, who now sits behind bars on corruption charges, are likely to threaten his leadership.

On the presidential campaign trail, Hong promised to prevent pro-Park members from taking senior party positions. He reiterated this promise on Monday, saying it would be hard for them to take such positions.

Regarding cooperation with the Moon Jae-in government, Hong made it clear he will fight against cabinet appointees whom he deems to “undermine national security” ? in other words, North Korea sympathizers.

“I hope President Moon considers our concern that people tapped to become ministers could pose a danger to our national security,” said the new party chief.

Hong added that it is too early to judge Moon’s performance as president.

In the May 9 election, Hong came in second with 24 percent while Moon won 41.1 percent. Hong said he was defeated because young voters considered his party to have “completely failed in justice and fairness” in the aftermath of the Choi Soon-sil scandal that eventually forced former President Park out of office.