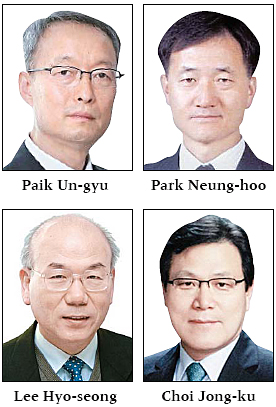 “Paik is a renowned scholar in energy consumption predictions and renewable energy,” Park Soo-hyun, the presidential spokesman, said. “He is the best person to lead the new administration’s commerce, trade and energy policy. We have high expectations that he will create jobs by reviving industries, establish foundations for new growth for the fourth industrial revolution and find new energy sources.”

Park said Moon selected his health and welfare minister for his expertise in social welfare issues including minimum standards of living and unemployment issues. “He is the best person to create a middle- and long-term plans to combat the low birth rate and the aging of Korean society,” the spokesman said.

Moon also filled two minister-level posts outside of the cabinet. Choi Jong-ku, president of the Export-Import Bank of Korea (Eximbank) and a veteran of the finance ministry, was named head of the Financial Services Commission. Lee Hyo-seong, a professor emeritus at Sungkyunkwan University and former vice chairman of the Korea Communications Commission (KCC), was named to head the KCC.

Choi’s insights into economics and finances made him the best person to push forward the Moon administration’s financial policy, Park said. “We expect him to resolve the household debt issue, support corporate and industrial restructuring and activate a financial policy that will stabilize the ordinary people’s lives and create new jobs.”

The new head of the Korea Communications Commission was chosen for his commitment to reforming the broadcasting industry to make it more fair and independent, Park said.

Moon took office on May 10 as soon as his victory in the previous day’s snap election was confirmed. He started his five-year term without the ordinary two-month transition period, after his predecessor was removed through an impeachment process. After nominating Lee Nak-yon as prime minister on his first day as president, Moon named 17 ministers by Monday, taking 55 days to form his cabinet.

The two minister nominees will have to go through nonbinding confirmation hearings at the National Assembly. Even if lawmakers reject the nominations, Moon can still appoint them. Of the 17 ministers, seven have been confirmed and sworn in. Opposition lawmakers rejected Foreign Minister nominee Kang Kyung-wha, but she was sworn in.

Moon made a promise during the campaign that he would name women to 30 percent of his cabinet positions. He chose four women as ministers, marking 24 percent as of Monday. If he names a woman to head a new ministry for small enterprises he vowed to create, 28 percent of the cabinet will be women.

Moon named women to two minister-level posts outside the cabinet: the head of the Ministry of Patriots and Veterans Affairs and the head of the Anti-corruption and Civil Rights Commission.