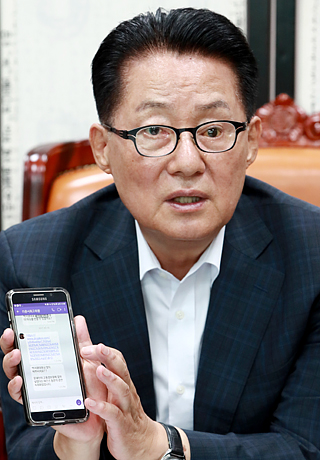 In his office in the National Assembly on Monday, Park Jie-won, former chairman of the People’s Party, discloses text messages exchanged on his Viber account to dismiss his involvement in fabricating tape records to smear Moon Jae-in during the presidential campaign. [YONHAP]

“The party’s judgement on whether there was systematic involvement in the scandal is that Lee acted alone,” said Rep. Kim Kwan-young, who led a fact-finding committee into the scandal, at a press briefing at the National Assembly. The fake audio scandal has rocked the party, sending its approval rating to five percent in the latest poll.

Regarding Ahn Cheol-soo’s possible involvement, the lawyer-turned-politician said the internal investigative team “found no evidence or gained testimony whatsoever to prove Ahn was involved or had known about the fake materials.”

The People’s Party’s conclusion was the outcome of its own internal probe into the scandal.

On the tape in question, a person claims that Moon’s son, Moon Joon-yong, landed a coveted job at the state-run Korea Employment Information Service (KEIS) in late 2006 because his father was senior presidential secretary for civil affairs. The voice on the tape claimed to be Moon Joon-yong’s friend from his time at Parsons School of Design in 2010.

It turned out the voice was that of Lee Yu-mi’s brother.

Lee also allegedly captured shots of a three-way group chat, which she alleged involved herself and two of Joon-yong’s friends from Parsons. One person says in the chat that Joon-yong had talked about a “free pass” that got him into KEIS. It was revealed that Lee Yu-mi typed all three parts in the chat, using three different mobile phones.

For its internal probe, the fact-finding committee questioned Ahn, who founded the party early last year, on Sunday as well as other senior party members who were involved in Ahn’s failed presidential campaign. Monday’s press briefing repeated the party’s assertion that Lee Yu-mi acted alone in creating the fake materials.

On why Lee Yu-mi, the 38-year-old CEO of a startup company, would have committed such an act, Kim Kwan-young said she faked the materials because she was under growing pressure by another party official named Lee Jun-suh to provide evidence to be used against Moon.

Kim added that the People’s Party became aware of Lee Yu-mi’s illicit action around June 24, when she contacted party officials and confessed out of fear that she would be arrested for spreading false information. Lee is now being questioned by prosecutors while being detained.

While the People’s Party denied that anyone in the chain of command colluded with Lee, it is still possible that the Ahn campaign pushed ahead in attacking Moon with evidence provided by Lee just days before the May 9 election, even while knowing the content could be false. If that is the case, party officials involved could be subject to criminal prosecution. Three former campaign officials, including Lee Jun-suh, a former party decision-making body member who handed in the audio tape and chat shots to campaign headquarters, were questioned by prosecutors on Monday. All three denied colluding with Lee.

Former lawmaker Kim Seong-ho, who worked in the Ahn campaign as a deputy vice director, said before reporters on his way to the Seoul Southern District Prosecutors’ Office that he did not even know Lee Yu-mi or Lee Jun-suh. Kim noted that Ahn would have never allowed the press briefing on May 5, which was held four days before the election in order to attack Moon by citing the tape and chat shots, to take place had he known the materials were fabrications.