Rain may be welcome but comes at high cost

Rain may be welcome but comes at high cost 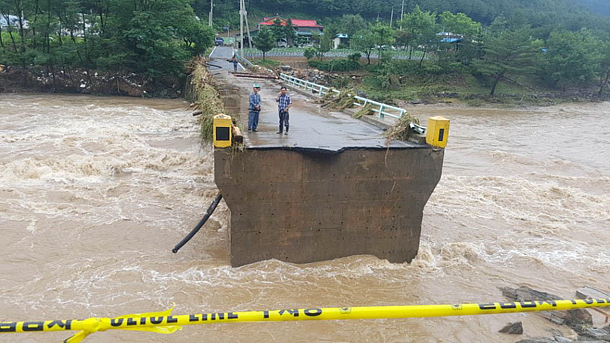 A section of Gadeok Bridge, the only entrance to the village of Gwangwon, crumbled and was swept away by the roaring stream current in Hongcheon, Gangwon, which experienced the heaviest rainfall Sunday night. [YONHAP]

One person died in the heavy rains that covered Seoul, Gyeonggi and Gangwon from Sunday, a highway in Gyeonggi was blocked by a landfall, hundreds of houses were flooded and about 70 residents in Gangwon were isolated after the only road into a village was flooded and disconnected.

A man in his 80s was reported lost in Cheongju, North Chungcheong, on Monday. “Around 12 p.m. Monday, a man was crossing a stone bridge on Musim Stream in Seowon District when he fell into the water,” said a passerby who called the local fire department. The man was found dead in the stream some three hours later by authorities.

Heavy rain advisories were sent by the Korea Meteorological Administration in Seoul, Gyeonggi and Gangwon on Sunday. 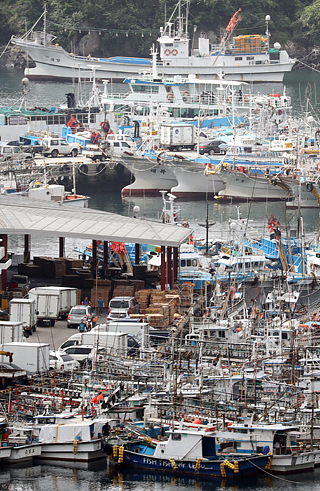 The heavy rain advisories issued in Seoul, Gyeonggi and Gangwon were raised to warnings by Sunday night. They were lifted by Monday afternoon.

“The monsoonal rain is expected to fall again tonight and an additional 30 to 80 millimeters is expected throughout Seoul, Incheon and northern Gyeonggi, and another 50 to 100 millimeters is expected in southern Gyeonggi until early morning Wednesday,” the KMA said on Monday. “In the middle and southern regions of Gangwon, another heavy rain advisory or warning may be issued tonight, and the monsoonal rain will continue in Gangwon until Wednesday morning.”

Due to the downpour, the embankment of a construction site near Gyeongbu Expressway in Yongin, Gyeonggi collapsed, blocking part of the highway around 8:56 p.m. Sunday. No deaths or injuries were reported here.

Workers cleaned the sediment off the highway by midnight, but a section of highway connected to the Yeongdong Expressway has since been closed off as a safety precaution.

“The Korea Expressway Corporation is using fastening devices on embankments to prevent more from collapsing onto the highway,” said a police officer, “but the section will be closed for two to three more days, until we find out the exact causes.”

In Hongcheon, which experienced the heaviest rainfall in Gangwon, part of the road leading to Gadeok Bridge, the only entrance to the village of Gwangwon, crumbled and was swept away by the roaring Naerin Stream on Sunday night.

About 70 residents of Gwangwon have been isolated since, but no deaths or injuries have been reported. The water level remained too high on Monday afternoon for authorities to begin reconstruction efforts.

Also in Gangwon on Sunday, 24 people were isolated in a motel in Wonju after the river flooded a bridge, the only pathway connecting the motel to the main road. Authorities rescued them using a boat. Twelve hikers were also rescued in Hongcheon.

In Seoul, the pathways on the either side of the Cheonggye Stream were blocked from public access from 8:30 p.m. Sunday as the water level rose.

A total of 416 houses throughout the country flooded Sunday, according to authorities. Of these, 35 were located in Suwon, Goyang and Guri and 322 were in Seoul.

Some 241 trails on mountains and in national parks, including Mts. Bukhan, Taebaek and Sobaek, were also closed off on Sunday. A landfall near an entrance to Mt. Bukhan damaged six cars.

Some 12 seaways have also been shut down since Sunday, including the Incheon-Baeknyeong Island and South Chungcheong’s Daecheon-Sapsi Island seaways. The Hangang Hydro Power Site opened the dam of Bukhan River for the first time this year to control water levels on Monday morning.

The Ministry of Public Safety and Security held an emergency meeting on Monday morning to discuss responses to Typhoon Nanmadol, which was expected to reach the waters south of Seogwipo, Jeju Island, around 3 a.m. today. The typhoon on Monday morning was measured to be relatively weak, with a maximum wind speed of 21 meters per second.

The KMA forecasted some 30 to 80 millimeters of rain in Jeju from Monday night to Wednesday morning. The typhoon is expected to die out near Japan on Wednesday.