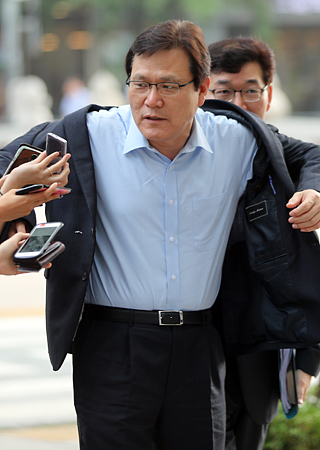 Choi Jong-ku, the nominee for head of the Financial Services Commission, enters the office of the Korea Deposit Insurance Corporation in central Seoul on Tuesday. [YONHAP]

Choi Jong-ku, the nominee for head of the Financial Services Commission, faces a range of pressing financial policy challenges that have shown little or no sign of improvement.

The former president of the Export and Import Bank of Korea cited job creation, surging household debt levels and corporate restructuring as his policy priority.

Unexpectedly, Choi mentioned job creation first as his major agenda item during a press briefing held after the announcement on Monday.

“If I become the head of the Financial Services Commission, I will focus on contemplating how the finance sector can contribute to creating more jobs, the most pressing issue for the Korean economy,” he said.

“If capital goes toward more productive segments, the finance industry can play a role,” he added.

Job creation is not a common pick for the head of the regulatory agency but observers see that the move shows Choi’s inclination to follow the initiatives set by the Moon Jae-in administration.

His stance won’t sit well with some banks’ decisions to close bank branches and reduce staff with the rising popularity of digital banking. Citibank Korea, for instance, will start closing nearly 80 percent of its branches across the country starting Friday.

Regarding the U.S. bank’s decision, Choi said “The efficient reduction of bank branches is at odds with job creation.”

Citibank Korea said it will not cut any staff despite the branch closures.

“We need to think about how the two goals can be achieved in a harmonious way,” Choi explained on Tuesday on his way to the office of the Korea Deposit Insurance Corporation in central Seoul.

He listened to briefings from the heads of the major departments of the Financial Services Commission at the office.

The first briefing was about the issue of household debts, which currently amount to 1,359 trillion won ($1.18 trillion) as of the first quarter.

He acknowledged that the current debt level is “excessive” given the GDP ratio. Choi will be required to draw up a new debt-controlling measure by August in cooperation with the Ministry of Strategy and Finance.

Choi’s career has centered on international finance management at the Ministry of Strategy and Finance. The 60-year-old career bureaucrat is credited with stabilizing the currency market during the 2008 financial recession.

He was born in Gangneung, Gangwon and graduated from Korea University with a major in trade. He also received a master’s degree in Public Policy and Administration from the University of Wisconsin-Madison.

Prior to the top post at the Exim bank, he served as the head of Seoul Guarantee Insurance, a public body that guarantees payments.