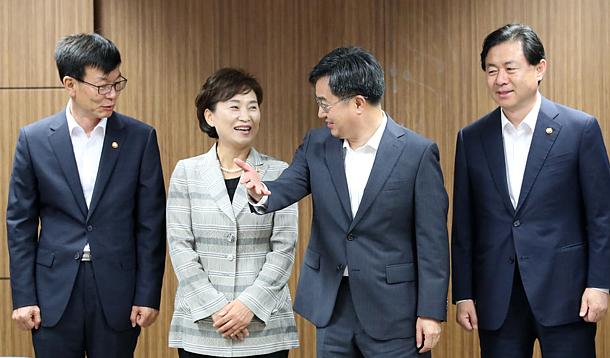 The Moon Jae-in economic team announced Tuesday that it will release a five-year plan later this month.

Finance Minister Kim Dong-yeon said during the economic ministers meeting that President Moon will be participating in a discussion later this month to decide the nation’s mid-term economic policy direction and vision including much awaited tax reforms.

The announcement was made a day after the Moon government’s economic team was completed with the nomination of the Minister for Trade, Industry and Energy and the head of the Financial Services Commission.

Once the other members on Moon’s economic team take office the economic policy push is expected to gain momentum.

Finance Minister Kim especially stressed the focus on tax reforms, which are expected to be announced alongside the five year plan.

“[The tax reforms] which are directly connected to people’s lives have to be treated sensitively and rigorously,” Kim said. “The announcement will be made no later than early August.”

In fact the de facto transition team has officially announced that the government plans to raise taxes on conglomerates and high income earners. However, the transition team said benefits for small businesses and the middle and lower income will be increased as an effort to secure equal distribution of wealth.

Additionally, tax reforms are expected to include an increased inheritance tax.

The Finance Minister also urged lawmakers to pass the supplementary budget that has been in held up due to strong opposition from the conservative parties.

“The point of all policies including tax reform is creating more jobs.”

Lawmakers on Tuesday held a session reviewing the government proposed 11 trillion won ($9.6 billion) supplementary budget at the National Assembly with the hope of raising the budget at the Special Committee on Budget and Accounts later this week.

However, the review was opposed by the conservative parties - the Liberty Korea Party and Bareun Party.

The People’s Party, which previously strongly opposed the budget, changed its position on Monday but proposed several changes on some of the plans that it considers to be wasting taxpayer’s money.

The Moon administration projected that the supplementary budget will help add 110,000 jobs this year including 70,000 jobs in the public sector and help combat the especially difficult job market that young people face.