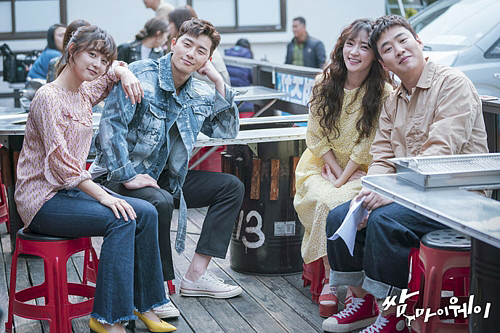 KBS2’s “Fight For My Way” topped the TV popularity index, taking over the lead that was previously occupied by Mnet’s audition show “Produce 101” for nearly three months, data showed Tuesday.

Starring Park Seo-joon and Kim Ji-won, “Fight For My Way” scored 266.2 points on the Content Power Index (CPI), becoming the most popular TV program during June 19-25.

CPI, developed by entertainment company CJ E&M and Nielsen Korea, measures the popularity of TV shows based on the number of views of related news stories, online search tallies and buzz on social media.

The coming-of-age romantic comedy series centers around a group of four young adults, who say they have “third-rate lives” due to their mundane and mediocre lifestyles but later push forward to realize their unfulfilled dreams.

Previously, the CPI index was led by the second season of “Produce 101” for 11 straight weeks. This year’s male-exclusive show led to the formation of the project band Wanna One.