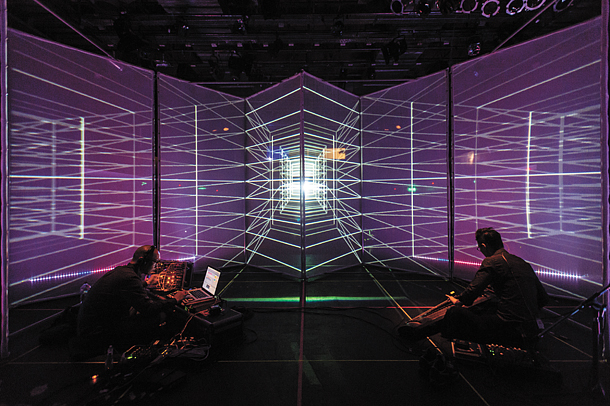 Muto, an art project group composed of one geomungo (traditional Korean long board zither) player, a graphic artist, an EDM producer and an interactive designer, performs at Teatro San Martin in Buenos Aires in 2016. [VIEWSIC]

The National Theater of Korea has been putting on the Yeowoorak Festival for over eight years. The festival, which gathers music groups who perform gugak (Korean traditional music) with a modern twist, brings together the old and the new, mixing in a little bit of jazz, literature and even theater over the past years. The festival has become a crowd favorite and has nearly sold out every summer since 2010.

To meet the already high expectations of the audience, how did organizers put together this year’s Yeowoorak Festival?

Won Il, artistic director of this year’s festival said he gathered groups that can show off “how they evolved Korean traditional music in their own unique and original way.” This year’s festival kicks off on July 7 at the National Theater of Korea in central Seoul. 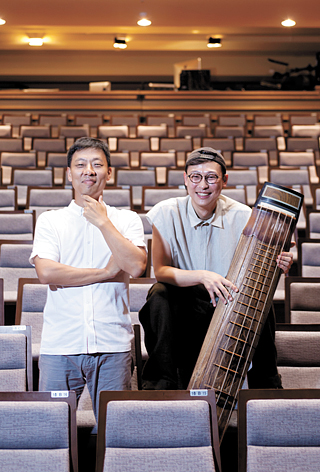 Park Hun-gyu, graphic artist, left and Park Woo-jae, geomungo player, pose for a photo at the National Theater of Korea, where their group Muto will be staging an unconventional performance of gugak and media art on July 16, as part of this year’s Yeowoorak Festival. [JEON HO-SUNG]

Out of the two weeks of performances, Director Won said that the “most revolutionary” will be “The Two Mountains” presented by art project group Muto, which will be performed at 4 p.m. on July 16.

It is not easy to imagine what kind of music Muto will offer. The group says what they do is fuse visual art and music, or what they call “viewsic.” To learn more about their performance, the JoongAng Sunday, an affiliate of the Korea JoongAng Daily, recently sat down with Muto for an interview.

“I want to say that what we do is a visualization of lyrical electronic dance music (EDM) using geomungo,” said geomungo player Woo-jae.

Muto was formed last May and the group says it’s really difficult to explain what they do exactly. It’s even hard to set up their performance - their stage itself takes the group three days to build.

Graphic artist Hun-gyu, is a bigwig in the visual staging industry, creating visual backdrops for the concert of popular groups like Big Bang. But he left his lucrative career and started Muto, saying that he no longer wants to be involved in commercial activities.

“I should actually make room for younger graphic artists,” said Hun-gyu, explaining why he decided to stop working for top artists. “I’ve been living in Hongdae for more than 20 years now and have met a lot of musician friends. Then the idea came up of doing something with them through combining the visual skills I have. Fueled by my imagination, I immediately formed this group to create something new.”

Woo-jae and Hun-gyu say they met a few years ago during AYAF (Arko Young Art Frontier), a workshop organized annually by the Arts Council Korea (Arko) in an attempt to foster and support young artists. Woo-jae was participating as one of the young artists and says he was mesmerized by how Hun-gyu, who was a guest speaker at the workshop, combined his music with graphic images on the spot. Hun-gyu said he was also amazed at Woo-jae’s style of playing geomungo.

“[At that point,] I had worked with many musicians of diverse genres but never with gugak,” said Hun-gyu. “I suddenly went through this diversion of my thoughts and consciousness. My education in design and art was from the West, and I worked with music from the West, but I am Korean and I live in Korea right now. I felt weird that I feel unfamiliar to traditional Korean music and that I’ve never worked with gugak musician so that’s when I decided to create this group.”

Woo-jae is known for his unique and unconventional way of playing geomungo, and is perhaps more known by Europeans than by Koreans. He’s been active in Europe as a composer and performer with renowned modern dance choreographer Sidi Larbi Cherkaoui and they’ve toured the world together.

“I’ve always been interested in doing something new and unconventional,” said Woo-jae. “My unique way of using the bow started while I was just playing around on the instrument while practicing. The sound I create with the bow is like a cello, but has more squeaks. People say they really like this ‘noise’ I create using the bow.”

According to Woo-jae, geomungo is one of the traditional music instruments in Korea that has not been modernized compared to other traditional instruments and that it has been well preserved in its original form.

“I think that is why it is more interesting for me to experiment on this instrument to find new sounds,” Woo-jae added.

“When me and Shin Beom-ho, the EDM producer, heard Woo-jae play for the first time, we too thought that dirty, squeaky noise he was creating was very appealing,” said Hun-gyu.

“It’s like the sound that a haegeum (traditional Korean fiddle) makes when played with a bow that has no resin,” he added, chuckling. “It’s definitely a sound you’ve never heard before. And the inspiration it gives us who work in the alternative arts circle is so great. We have no limits. Next time, we may work with modern dancers, or perform in exotic places outside art centers. We have so many possibilities.”

“The Two Mountains” is a new format of performance that projects Muto’s unique motion graphics together with the scenes of Korean rivers and mountains onto LED folding screens that are 6 meters (19.7 feet) high.

“Our group will be the most difficult when it comes to setting up the stage,” said Hun-gyu. “Shin uses this modular synthesizer that is connected to large lumps like a circuit. This instrument takes in the sounds of geomungo that Woo-jae makes and converts it. Meanwhile, I receive the signals that are sent to the modular synthesizer, sort out the structure of the sounds and send out visual images that respond to each sound that get projected on the screens.”

Since all of this process is done live on stage, it may seem like they are improvising sounds and images on the spot but the group says they’ve been working on creating what to show for three months now. They used drones to film and acquire pictures of Korea’s rivers and mountains that will be used during the performance.

“The name of the team Muto, refers to ‘vast landscape.’ As you can see, we pursue a sense of nature with our name,” said Hun-gyu. “Usually, the aesthetic aspect of most concerts is quite Western. As many Koreans regard Western faces as the standard of beauty - with high noses, large eyes and fair skin - we seem to think about grand scenes like the Grand Canyon when we talk about what beautiful nature looks like. What I am trying to say is that while we are mesmerized by the grandeur, we fail to notice the beauty around us. While we were filming for the performance using drones, we were so amazed at the abundance of untouched nature here in Korea. We were comforted and began to look at nature with a new perspective. Perhaps the beauty we have failed to notice is within the nature.”

It may look like what Muto is doing is simply writing music and setting up visuals that match the music. But Muto says the core of their activity is getting inspired by and influencing each other.

“You have to look at the music produced by Muto with a different perspective,” said Woo-jae. “The instrumentalist on stage, which is myself in this case, is not the one asking for visual images to decorate his stage during his performance. Everything gets created through collaboration and our ultimate goal is to mix music and visual images well so that it looks like one united work of art.”

Muto’s first work titled “GON,” according to Woo-jae began with just a line of melody he wrote. Then Shin began to add electronic sounds onto the melody, creating a whole new sound.

“It’s like a chain,” said Woo-jae. “One starts something, then the other adds on top of it and so on.”

Yeowoorak is a music festival for the audience, but for Muto, they say it’s a platform where they can freely experiment with their work.

“If it becomes more experimental, we can try something more,” said Hun-gyu. “In fact, experimental musicians like Ruichi Sakamoto has his visual artist on stage next to him. We are aiming towards something at that level. We try to show a different style every time we perform and we never know what kind of performance we will have next.”

“We hope those who are mesmerized by something new and like to experiment come to our performance as we think they will really enjoy ‘The Two Mountains,’” said Hun-gyu.