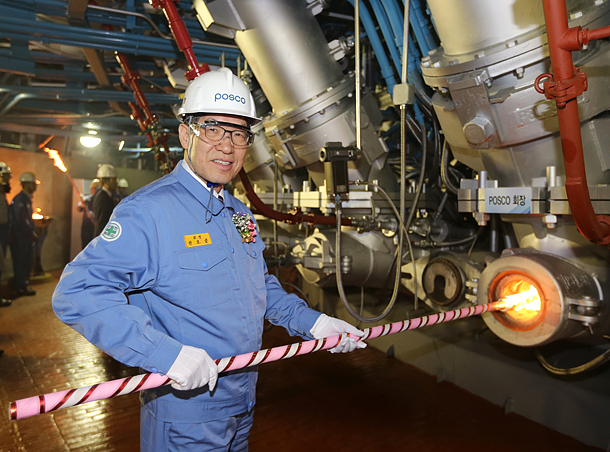 Steel is often called the “grain of the manufacturing sector.” In construction and various industries, it is hard to find a field that does not use steel. To make one car, it requires 1 ton of steel material. It is also used in various electronic goods and food packaging. Late Posco Chairman Park Tae-joon devoted his life to constructing steelworks, which are essential for industrial independence.

The Steel Survival Strategy meeting in New York in June was a trade battleground where countries fought over the grain of the manufacturing sector. Several years ago, it used to be a place of exchanging information and opinions on the direction of the steel market among CEOs of top steel companies such as ArcelorMittal, Nippon Steel and Posco. But this year, hardly any CEOs were in attendance.

Behind their absence is the undisguised trade protectionism of the United States. Notably, stars and stripes were all over the conference room in the Marriott Hotel in Times Square, Manhattan. The meeting has been held in New York every year, but this never happened. A Hyundai executive said that it didn’t look like a place to exchange information, and foreign attendees were coerced to take U.S. policies by the American steel industry.

Keynote speaker was John Ferriola of Nucor Corporation, a leading American steel company. He emphasized that China and other Asian countries pour steel at cheap prices into the international market while American steel workers lose their jobs. He mentioned President Trump’s executive order to the Department of Commerce in April to research foreign steel’s influence on the security of the United States and threatened that special measures will be taken on steel imports that threaten the industrial security of the United States. This could involve additional tariffs or the emergence of safeguards on imports.

Korea is the sixth-largest steel producer in the world, but on that day, Korea had little presence in the trade war between the powers. At the Korea-U.S. summit, steel was not mentioned. Trade protectionism is a reality, and we need to be vigilant.