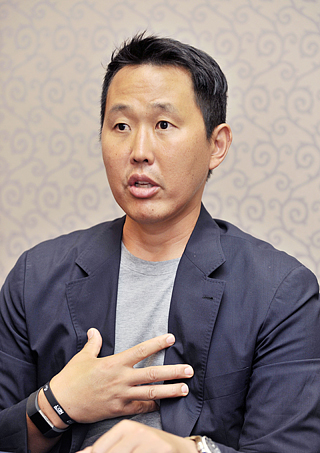 Refactor Capital Managing Partner David Lee talks about the Korean start-up scene and what he looks for in a company during an interview with the Korea JoongAng Daily at COEX in southern Seoul on Thursday. “It’s all about the founder,” Lee said. [SPARKLABS]

Although thousands of start-ups launch every year, only a few actually manage to make their product known to the public. For entrepreneurs and businessmen desperately trying to get their idea off the ground, one of the most important things is money. Angel investors, or seed investors, are people that constantly make dangerous bets in this market full of uncertainty.

Refactor Capital Managing Partner David Lee, one of the most successful Korean-Americans in Silicon Valley, said his focus when spotting a young start-up’s potential solely depends on the founder — in his or her motivation, drive and insight. Refactor Capital, which he co-founded last year, is an early-stage venture capital firm based in California that invests in IT start-ups exploring industries like health care, agriculture and aerospace.

Lee is an angel investor most known for having co-founded SV Angel whose portfolio included legendary names like Twitter, Pinterest, Dropbox, Airbnb and Snapchat. In 2015, he was listed No. 84 on the Forbes Midas List of Top Technology Investors.

Lee respects the motivation of Korean start-ups, which have often gone against a traditional Korean work ethos to do what they want, he explained in an interview with the Korea JoongAng Daily on Thursday. Lee was attending SparkLabs’ Demoday at COEX in southern Seoul, as a mentor. Koreans traditionally and culturally value stability as a core virtue in life, especially when it comes to job decisions. “The misfits, the nerds — those are the people I’m looking for,” he said.

Q. You mostly spend time in Silicon Valley. When you meet Korean start-up entrepreneurs, do you feel a cultural difference?

A. Yes. The dangerous part about start-ups today is that it’s become as popular as investment banking, law or medicine. In Korea, it’s getting hotter, but still not as hot as in the U.S. What I like about the Korean start-ups I’ve met so far is that the energy and motives are much more pure. It‘s less about doing it because it’s the “hip” thing to do, but more about “because this is what I love to do.”

These people probably went against parents’ wishes to work at fancy jobs like investment banks and financing. By presumption, they don’t worry about what other people think and that’s what I look in a founder: people strong enough to go against society, people who think for themselves. It’s more rare than you think — especially in Korea.

A lot of start-ups in Korea are concerned about bigger companies stealing their ideas. What is your opinion on this?

If somebody steals your idea, they did you a favor because it probably wasn’t valuable enough to begin with if it was that easy to copy. There’s always threat; big companies could do anything if they wanted to. But there’s more than functions to a product. Facebook tried to copy Snapchat three years ago but they failed despite having some features more valuable than the original. But Snapchat isn’t just about the features; it’s about the network, the brand and the media — these are factors that can’t be easily copied.

What differentiates a product from other similar services are subtle default changes. With Instagram, when you open it, the first screen shows pictures of other people, whereas for Snapchat the first screen is the camera. This small default sets Instagram’s primary use as “consume” and Snapchat’s as “create.” This subtle shift in thinking is actually very core to the company’s values it brings to the world and this is what founders are good at. They are thinkers that provide insight after insight, always viewing things in a different lens. These are the kind of people I invest in.

As an angel investor, your job is to predict start-ups that will succeed in the future. What are your standards?

It’s all about the founder. Whenever I meet a founder, I ask three questions: why you, why this [product], why now. And there, I’m asking his or her story — of all the things this person can do in their lives, why did they pick this? If I can really understand that and almost fall in love with that, then I’ll probably invest. I believe in something called “founder-profit fit.” Some people have skills that are better suited for certain start-ups. You have to match the person’s ideas and motivations with the product they’re building.

Is it possible that a great founder has a good match with the product, but fails because of a bad team that executes his ideas?

This would sound obvious, but the main reason why start-ups fail is because they don’t build something that somebody loves. And if you can’t build that, you don’t have anything, no matter what team you have. In my industry, we call that product-market fit (a concept created by Mac Andreessen). This is very hard to define, but you know it when you see it. My job is to bet on the founders who can find that.

How do you determine product-market fit?

It’s a gut feeling, but the first sign of a product-market fit is: there are some people who love and can’t live without your product. The first task for a start-up is to build something initially that a very small group of people, say 15, will love and make their life worse-off if you take the product away from them. The very hard thing about start-ups is that there aren’t many companies that make something people love, and out of this number of companies, there aren’t many that can actually build a business out of it.

Do you have advice for young start-ups that seek angel investment?

First, if you have to ask others or yourself whether or not to start a company, don’t do it. The great founders that I know started a company because that they didn’t have any other choice: this is all they think about. Those are the ones you want to invest in: the nerds, misfits and wierdos.

Second, focus on one thing at all times. Start-ups have limited time and people. If you try to do two things at once, you’re not going to be able to do one thing really well. That’s why sequencing is important.

And another piece of advice: if you’re younger, build a product for yourself because that will cut down on your market research. Google’s co-founder Larry Page wanted a better search engine so he built one for himself. If you make a product you want, there’s no need for market research because you yourself are the initial market.