Samsung is investing $32 billion to keep lead in chips

Samsung is investing $32 billion to keep lead in chips 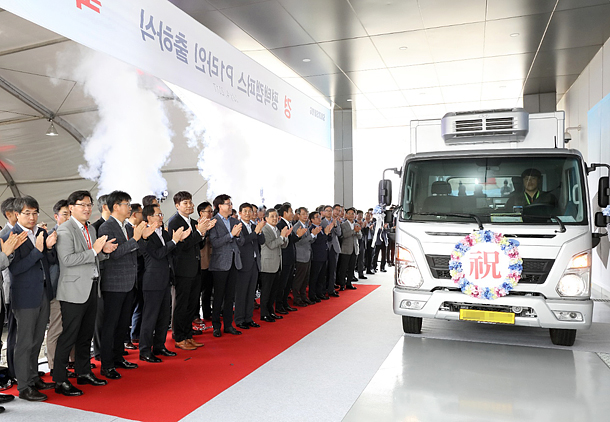 Samsung Electronics celebrates the start of commercial production of 64-layer vertical NAND chips at a new line in Pyeongtaek, Gyeonggi, on Tuesday with about 100 key executives and employees present. [YONHAP]

Samsung Electronics is investing 37 trillion won ($32.2 billion) to expand its semiconductor and display factories as demand grows with digitization.

The new line adds to Samsung’s production capacity for the advanced chip, which started being produced in the company’s Hwaseong plant in Gyeonggi from December last year. Vertical NAND (V-NAND) chips refer to chips with multiple layers of memory cells stacked vertically in a three-dimensional structure. More layers mean more chip capacity and productivity, and 64 layers is the latest breakthrough by Samsung.

The new facility, dedicated to production of the 64-layer chip, is the largest facility in the world for a single production line, Samsung said in a statement. However, the production capacity or size of the facility were not disclosed, as they are trade secrets.

“With the dedication and support of our employees, customers and partners, our Pyeongtaek campus represents a new chapter in Samsung’s semiconductor operations,” said Kwon Oh-Hyun, vice chairman and CEO of Samsung Electronics.

As global chipmakers shift their focus to higher capacity V-NAND chips, Samsung announced goals last month to shift half of its NAND chip production to the fourth generation 64-layer chip. The fourth generation chip, according to Samsung, transmits data 50 percent faster than its predecessor, the 48-layer V-NAND chip. The new chips are core components for data centers, big data analysis and artificial intelligence.

While only a single line has been established at the new semiconductor plant in Pyeongtaek, the company aims to add more production lines through additional investments up to 2021. In the proposed 37 trillion won, Samsung vowed a 30 trillion won investment for expanding semiconductor facilities.

Some 15.6 trillion won has already been invested during the two-year construction of the production line in Pyeongtaek. The remaining 14.4 trillion won will be invested over four years to increase 64-layer V-NAND production capacity.

Samsung also plans to invest six trillion won in its existing plant in Hwaseong to establish a semiconductor fabrication line with state-of-the-art infrastructure to prepare for the future semiconductor market. Extreme ultra violet equipment can cut the cost of the overall chip fabrication process.

In addition, Samsung plans to construct a second semiconductor fabrication line in Xi’an, China. “We aim to actively respond to the Chinese market with its great demand for NAND flash memory chips.”

According to Samsung, the 37 trillion won investments in both semiconductor and display businesses is expected to create 440,000 new jobs directly and indirectly until 2021.