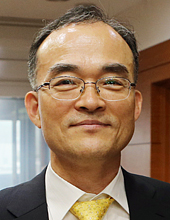 “The nominee served key posts of the prosecution and the Ministry of Justice,” said Park Soo-hyun, presidential spokesman. “He is meticulous yet gentle, and the prosecutors deeply trust him. We have anticipation that he will stabilize the prosecution quickly and succeed in reforming the organization.”

Park also said Moon is the perfect person to meet public expectations for eradicating corruption from Korean society. The nominee was praised for sternly and fairly handling major corruption cases involving senior officials, political heavyweights and conglomerates during both liberal and conservative administrations.

President Moon decided to fill the vacancy in the prosecution’s leadership because the country has been without a prosecutor general and justice minister for months. Vice Justice Minister Lee Keum-ro made the recommendation, Park said.

Moon, 56, passed the bar exam in 1986 and completed his judicial training in 1989. A native of Gwangju, he graduated Gwangju Jeil High School and studied law at Korea University.

Moon started his career as a prosecutor at the Daegu District Public Prosecutors Office. He worked on many high-profile cases, and one of the earliest investigations he participated in was an independent counsel probe in 2004 on corruption allegations involving associates of then-President Roh Moo-hyun. As a result, Cho Do-sul, who was serving as the general affairs secretary of the Blue House then, was indicted.

In 2007, he also investigated the scandal of Shin Jeong-ah and Byeon Yang-kyoon. Shin, an art curator accused of forging her academic credentials, and Byeon, a former presidential aide suspected of having an affair with Shin, were investigated for a series of corruption charges. Shin was indicted for embezzlement and academic forgery and Byeon for abuse of power in assisting Shin in the rise of her career.

While working for the special investigation department of the Seoul Central District Prosecutors’ Office in 2008, Moon investigated the allegations that Kim Kyung-joon, former business partner of then-President Lee Myung-bak, manipulated stock prices, forged documents and entered the country with an intention to undermine Lee’s presidential campaign. He also investigated the slush funds scandal of Hyosung Group and investigated Lee’s son-in-law in a separate probe.

He also headed the investigation of Cho Hyun-ah, vice president of Korean Air, over the “nut rage” incident. Cho was investigated for obstructing aviation safety for ordering a Korean Air flight to taxi back to a gate of John F. Kennedy International Airport in New York City after she was dissatisfied with the way a flight attendant who served her nuts. She also assaulted the cabin crew chief over the incident and forced him off the plane.

In 2015, he headed the special investigation team that looked into the graft scandal surrounding Sung Wan-jong, a construction tycoon who committed suicide after revealing that he gave money to top politicians for years. Many on Sung’s list were the inner circle of then President Park Geun-hye, and the investigation indicted former Prime Minister Lee Wan-koo and Hong Joon-pyo, then governor of South Gyeongsang.

“He is extremely meticulous and principled,” said a former prosecution official who worked with Moon. “He handled investigations based on law and principles, never shaken by public opinions or political pressures. He was in charge of many high-profile probes, but he was never seen as an ally of any administration or political forces. That alone shows his character and integrity.”

The National Assembly has 20 days to complete the confirmation process after the president’s request, with the possibility of a 10-day extension. Even if the lawmakers reject Moon, the president can still appoint him.