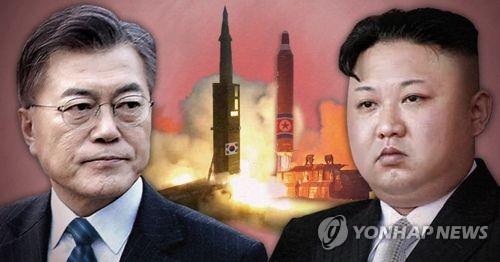 North Korea fired a ballistic missile off its east coast Tuesday morning at around 9:40 a.m., South Korea’s Joint Chiefs of Staff said in a statement.

The projectile was fired from Banghyon Air Base in North Pyongan Province and traveled about 930 kilometers (578 miles) before landing in the East Sea. Local military officials said they are analyzing the type of missile used.

A National Security Council meeting has been scheduled for 11:30 a.m. today on the order of President Moon Jae-in, the Blue House said.

North Korea carried out 11 missile tests this year, the most recent on June 8, when it fired several short-range antiship cruise missiles off its eastern coast. The missiles flew about 200 kilometers after peaking at an altitude of 2,802 kilometers before landing in waters between North Korea and Japan.

The latest missile launch came shortly after Moon returned from a summit meeting with U.S. President Donald Trump in Washington, in which both leaders agreed to bolster their bilateral alliance for a “complete, verifiable and irreversible denuclearization of the Korean Peninsula.”

North Korea’s state-run newspaper Rodong Sinmun wrote in a commentary Sunday that the South Korea-U.S. alliance was “no more than a lever for domination and subordination and noose of submission,” adding that “sycophancy and submission” to the United States has led to the South's demise.

The missile test is a critical blow for Moon’s soft approach to Pyongyang. Moon had said several times he was willing to talk with the North on the condition that it refrains from any additional nuclear or missile tests. Pyongyang has instead urged Seoul to distance itself from Washington.