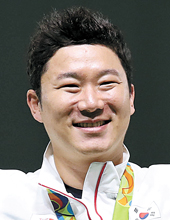 After the men’s 50-meter pistol event was eliminated from the 2020 Tokyo Olympics, the International Shooting Sports Federation (ISSF) decided to host a forum to discuss the possibility of bringing the category back to the 2024 Olympics.

During the first week of June, the International Olympic Committee (IOC) held a committee meeting at IOC headquarters in Lusanne, Switzerland, where they confirmed the men’s 50-meter pistol event would be removed, while mixed 10-meter air rifle, pistol and trap events are to be added.

With the decision, Jin Jong-oh, who won gold three times in a row in the category, has lost his shot at a fourth win. About 48 countries’ representatives have signed their names disagreeing with the decision, but the IOC has held firm. Its executive committee attended the Korea Shooting Federation executive meeting to explain that once a decision has been made, it is difficult to overturn. Moreover, the new categories will allow for greater equality at the 2020 Tokyo Olympics.

As a result, the shooting federations of other countries are now working to bring the men’s 50-meter pistol back to the Olympics in 2024. But it won’t be easy, as few categories have ever returned to the Olympics after being eliminated.

Categories that have been eliminated include the 60-meter dash, cross-country, standing high jump, standing long jump, men’s stone throw, lacrosse and cricket. Nevertheless, some categories have made a return. Most recently, at the 2016 Rio Olympics, golf came back after 112 years - the longest time any sport has spent away. Rugby, which was eliminated after the 1924 Paris Olympics, made its return after 92 years at the Rio Olympics.

Wrestling, which has been an Olympic sport since the first Games in 1896, was almost eliminated due to recent judging controversies, but United World Wrestling successfully secured their spot and avoided elimination.

The IOC also announced the return of baseball at the 2020 Tokyo Olympics, thanks to Japan’s continuous efforts. The sport was added at the 1992 Barcelona Olympics and eliminated at the 2008 Beijing Olympics.

The 50-meter pistol event is the only one in which shooters can showcase their talent at a great distance - all others are 10 and 25-meter events.

Hopefully, for talented competitors such as Jin Jong-oh and fans who appreciate distance pistol shooting, the 50-meter pistol event can soon make a welcome return.