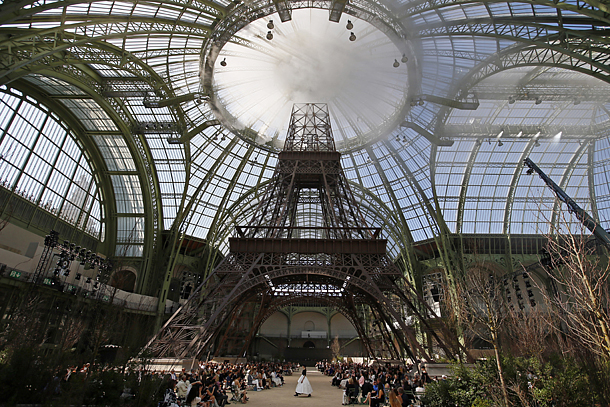 A model presents a creation for Chanel’s Haute Couture Fall/Winter 2017/2018 fashion collection under a replica of the Eiffel Tower at the Grand Palais museum in Paris on Tuesday.[AP/YONHAP]

PARIS - The ever-audacious Karl Lagerfeld proved he is still nimble when it comes to putting on a fashion show. The 83-year-old had a 46-ton Eiffel Tower recreated inside the Grand Palais for the pleasure of his Chanel couture celebrity guests.

Paris Mayor Anne Hidalgo returned the love by presenting him with the city’s highest honor. Here are some highlights from the fall-winter 2017 shows Tuesday at Paris Haute Couture Week. 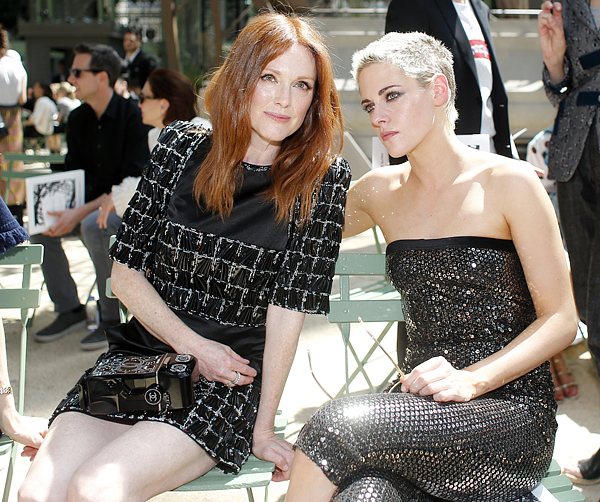 “Does it go through the roof?” asked a bemused fashion insider, pointing at the ceiling of the Grand Palais exhibition hall in Paris

It was a fair question. The 38-meter (125-foot) replica of Paris’ most iconic monument that greeted Chanel’s couture guests seemed to extend past the famed hall’s glass roof thanks to the illusion of swirling clouds created by steam.

“It’s extraordinary to come into the Grand Palais, which is awesome at the best of any time, but to stand under the tour Eiffel is extraordinary. Only Chanel,” Swinton said.

The wood-and-steel tower, which took workmen six weeks to make, was a stunning piece of craftsmanship. It copied nearly beam for beam the columns and metal twists of the edifice made by Gustave Eiffel for the 1889 Universal Exhibition.

The dawn of the 20th century - the period following the Eiffel Tower’s construction - was the creative touchstone for Chanel’s wintery-looking couture.

The first model strode out in sunlight filtered by wrought-iron columns to set the tone of the graphic, steel-colored collection.

She wore a wide-hipped, charcoal gray coat with exaggerated leg-of-mutton arms - styles that harkened to the Belle Epoque period.

This clever historic musing continued with flattened bowler hats and black patent lace-up ankle boots popular before World War I. Flourishing bouquets of plumes then shot out from wrists, ankles and shoulders in evening wear.

“In this collection, there are feathers treated like fur,” Lagerfeld explained.

But the designer relied on myriad references for a show whose one unifying theme might have been simply the Parisienne.

“It’s a vision of a revived Parisian woman. It is all about cut, shapes, silhouettes,” he added.

Signature tweed jackets were reimagined as long tunics, or cropped and double-breasted.

Then it got arty. Mechanical Art Deco motifs gave a 1920s flair to black froufrou gowns that evoked the paintings of Robert Delaunay. Their frothy, flower embellishments at the hem gave the silhouette a vibrant dynamic.

Mini-dresses in tweed, retro bateau collars and bows under the bust mixed in a dash of the 1960s. Thigh-high boots added a hint of contemporary provocation.

And there was perhaps no better site for such an award than beneath a replica of the Eiffel Tower.

“Paris gives you its thanks and its love through this Grand Silver Gilt medal ... which is our city’s highest award,” Hidalgo said in front of a celebrity audience, including models Claudia Schiffer and Cara Delevingne. “From the bottom of our hearts, thank you. Paris loves you.”

Lagerfeld, a contemporary of the late fashion icon Yves Saint Laurent, has been at the forefront of Paris fashion since the 1960s, designing for Chloe before taking over Chanel in 1983.

Although he doesn’t see himself as French, the designer professed his love for the City of Light.

“I am a foreigner and I intend to stay a foreigner because foreigners see Paris and France through a different eye,” he said, accepting the award. “And when you are not French, you look without nationalism or patriotism... Long live Paris.”

Another couture week, another set of exhausting, champagne-guzzling soirees replete with fashionistas and VIP guests.

Pharell and Katy Perry were among attendees at the Palais de Tokyo fete- as was actress Kristen Stewart, rocking her short blond hair look.

Stewart was named in May as the face of the fragrance and will star in a film campaign of the scent in the fall.