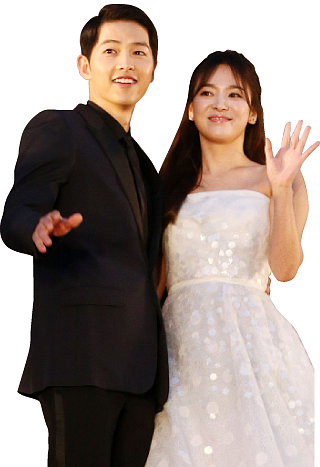 After months of denying dating rumors, actors Song Joong-ki and Song Hye-kyo, who co-starred in the 2016 hit drama “Descendants of the Sun,” have announced that they will be getting married on October 31.

The news was announced through a joint statement from Blossom Entertainment and United Artists Agency, the agencies of Song Joong-ki and Song Hye-kyo, early yesterday.

The statement read, “Song Joong-ki and Song Hye-kyo will become a married couple and will have their wedding on the last day of October. We apologize for the sudden announcement - as marriage doesn’t only involve the two individuals, but is also a family affair, we had to be careful until everything was settled. We hope for everyone’s blessings on this matter.”

The marriage, although kept out of the public eye until today, was initially decided about a month ago. Director Kim Jeong-yong of Blossom Entertainment said, “Song Joong-ki notified us of his plans to marry in quite a serious manner about a month ago and we have been scheduling the public announcement of this event ever since.”

The couple received the moniker “Song-Song couple” while playing a pair in “Descendants of the Sun.” Song Joong-ki played Captain Yoo Shi-jin of the Korean Special Forces Unit, while Song Hye-kyo played Doctor Kang Mo-yeon who is sent out to fictional country Uruk where Yoo is located to aid the army. The fictional couple was adored both in and outside of Korea and their love story coming to fruition has been the fantasy of many fans.

Each time over the past 15 months that dating rumors emerged in the press, agencies of both actors were quick to shut down the reports.

The first reports came in March of last year when a message board user claimed that they had seen the two actors enjoying a shopping date in the heart of New York, which had fans of the franchise clamoring to learn more. However, both agencies denied the notion, only saying, “The two are close friends. Both met in New York by chance and only had dinner together. [The report] isn’t even worth clarification.”

Song Joong-ki appeared as a guest on KBS News in March 2016 and simply said, “[The romance rumor] is like a running joke to us. I think it’s due to the high popularity of the drama.”

The second speculations emerged on June 18 when both actors were spotted by fans in Bali, Indonesia, at the same hotel. Director Kim at Blossom Entertainment once again stuck to his stance, saying, “as it was a personal holiday, we do not know what he did or who he met.”

The “Song-Song” couple delayed the announcement due to its possibility of interfering with the performance of Song Joong-ki’s upcoming film “The Battleship Island,” according to Kang Hye-jeong, head of the movie’s production company, Filmmaker R&K. “[Song Joong-ki] came to me about a month ago and told me about his upcoming marriage. I didn’t believe it at first, but I believe his marriage announcement won’t have much of an effect on the movie.”

Song Hye-kyo debuted in 1996 through an advertisement for school uniform brand Smart. She later went on to star in movies “Hwang Jin-yi” (2007) and “A Reason to Live” (2011) among others. She gained fame through her roles in big name dramas like “Autumn in My Heart” (2000) and “That Winter, the Wind Blows” (2013). She is commonly regarded as one of the most beautiful people of Korea.