Every morning when she wakes up, 25-year-old university student surnamed Lee checks out the latest webtoons on her smartphone. Lee’s favorites are Naver’s “My ID is Gangnam Beauty” and Daum Kakao’s “There is No Areum in the Engineering College.” Webtoons are web cartoons published online, typically on portal websites such as Naver and Daum Kakao.

“It’s like reading a story in pictures, but a little more than that. Webtoons these days have more messages than just entertainment. My favorite webtoons show what it’s like living in Korea as a female university student,” said Lee.

Webtoons have become a major part of the Korean digital culture; an average of over 7.5 million people read webtoons via computers and smartphones according to Naver, and that number grows substantially when including figures from other webtoon platforms such as Lezhin Comics, Toptoon and Mr. Blue.

It has been 15 years since the first webtoon platform called “Cartoon World” was started by Yahoo in 2002. Webtoons started garnering serious popularity in 2006, when Kang Full’s “Apartment” was made into a movie.

These days, the webtoon industry isn’t dominated by one single title or author, but healthy competition between multiple talented writers has created a space filled with diverse stories and fresh ideas.

Feminism has been an issue discussed for decades, if not centuries. But it wasn’t until recently that the matter has become so fiercely and openly discussed in Korea, after the emergence of the radical feminist website “Megalia,” which was created in 2015. Unlike previous feminist movements which generally took a peaceful and academic tone in their arguments, Megalia used a method known as “mirroring” - imitating the derogatory language men have used against women in the past - which sparked vicious online battles between the sexes.

Whether or not hostile gender battles can contribute to nurturing healthy feminist ideology on Korean soil, it is evident that some of the extreme measures have paved the way for relatively more moderate feminist movements to be accepted without much resistance. While radical forms of feminism tend to be more direct, and rooted in the actual experience of Korean women, indirect forms tend to borrow fictitious formats such as novels and webtoons.

Among the most popular webtoons portraying the life of young Korean women are Naver’s “My ID is Gangnam Beauty,” “Mask Girl,” and Daum’s “There is No Areum in the Engineering College.” While the authors don’t publicly call themselves feminists, thousands of women identify with the characters in their stories. 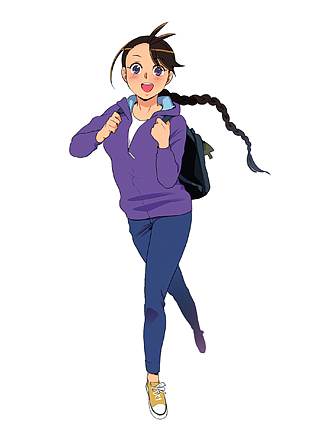 Ha-ni, the main character of the webtoon series “There is No Areum in the Engineering College” on Daum, lives the life of a female engineering student in Korean society. [LALA SISTER]

The three webtoons each adopt totally different tones, but they are presented in a similar manner, with incidents and characters that are all fictional but plausible. The conflicts in the stories are sometimes extreme, but they are all realistic enough that readers could empathize with the character’s experiences. Even if they haven’t come across the exact same situation in their lives, readers have either been through something similar, or have heard their peers speaking about the experience.

“Mask Girl” is infamous for its radical storyline, in which all the characters are either insane or semi-insane. The main character, Mo-mi, is born with a perfect body but an ugly face and an ugly mind; Mo-mi’s friend is a hypocrite who criticizes other people for only liking someone for their looks, who at the same time fancies her boss because of his model-like features; Mo-mi’s secret admirer is a quiet man who expresses his perverted mind behind the safeguards of online anonymity.

Since the characters show a slice of the darker side of society - namely murder, rape, adultery, violence, hypocrisy and cosmetic surgery - it is less popular than stories that do not touch on such sensitive issues. Yet, the stories provide a thought experiment on the taboos that are not easily discussed in daily conversations.

On the other hand, “My ID is Gangnam Beauty” and “There is No Areum in the Engineering College” revolve around a more-or-less ordinary female university student, showing readers the subtle moments of sexism women are forced to go through in their everyday lives. While “Gangnam Beauty” focuses on the conflicts that happen between the two sexes due to people’s vanity, “There is No Areum in the Engineering College” is about the daily struggles of a female university student. Rather than telling readers the problems that plague Korean society, both works chose to depict situations that highlight these problems, giving room for readers to think about the issues themselves.

As an ordinary engineering freshman, Ha-ni, the main character of “There is No Areum in the Engineering College,” struggles with obstacles in her college life: an over-bearing father, a stalker-like senior classmate, a sexist professor and a huge pile of homework that she just doesn’t understand. What makes Ha-ni’s life even harder is the latent gender prejudice that people take for granted.

In an interview with the Korea JoongAng Daily, the story writer of “There is No Areum in the Engineering College” explained that the title had been created when she, the Big Lala of the Lala Sister (Lala Sister is the team name of the authors; Big Lala writes the stories and Little Lala draws the characters) remembered having asked her female friend in the engineering department whether there really is a character like Areum in the engineering college.

The name Areum comes from an advertisement from local telecom provider KT in 2011, when it showed a pretty female engineering student surrounded and loved by her male colleagues. The commercial didn’t arouse much controversy back then. But nowadays, people criticize the advert’s sexist depiction of a woman, in which a female student is dependent on her looks and other boys. The title “There is No Areum in the Engineering College” is a full-on rebuttal to the conventional gender dichotomy.

“We didn’t start this cartoon to talk about feminism, and so we didn’t want to be recognized as a feminist webtoon. We only wanted to talk about how we could deal with gender equality,” explained Big Lala. “At first when we started the series, we thought that it would obviously come across as a cartoon about gender equality, shown through the eyes of a woman. But people branded us as ‘Megalian’ or ‘sexually commercializing women’ by looking at just parts of the characters or scenes.”

“We wanted to tell the story of the reality as it is,” said Big Lala. “We want to draw an ultimate ending where all the characters mature properly, but just as it was with our stories, it probably won’t end with a clear distinction between the good and the bad, or with a groundbreaking solution to the problems. The reality tends to flow to a much more stupid and idiotic direction. I don’t think a cartoon has to always talk about hopeful things.”

A 23 year-old university student surnamed Song who considers himself open to gender discussions and the idea of feminism. “I know that women are going through a lot, but sometimes I felt that the webtoons were depicting men in an overly cruel way. We know all this, so why would they draw this in this specific way?” said Song.

Contrary to the happy, mostly female readers who embraced the new medium through which they could voice their opinions, others attacked the webtoons and the authors for being sexually biased. “We were prepared for angry comments, but they were beyond imagination. They attacked us and insulted us in ways that were just incomprehensible,” said Little Lala, the artist.

“I deal more with the storyline as the story writer, and so I was struck harder by the comments. Some readers demanded ‘explanations’ to things I didn’t even understand, even mentioning my past works, and some people kept consistently uploading posts criticizing our work,” said Big Lala. “The funny thing was, that on social media like Facebook, where you have to use your real name, almost all posts were complimenting and cheering us on, whereas on anonymous websites, we were bombarded with malicious comments.”

Whether people like it or not, it is undeniable that webtoons have opened up a new chapter in the digital age. While the story writer of “There is No Areum in the Engineering College” commented that she came to understand why celebrities refrain from making any social or political comments, she added, “We wish this could be a webtoon that makes readers communicate, just as the main characters who just argue with each other at the beginning will [eventually] come to communicate.”