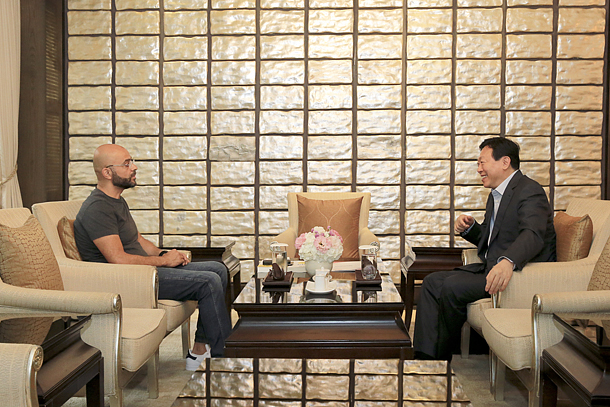 The theme of the talk was based on Gawdat’s book, “Solve for Happy,” which was published in January. The book approached the concept of happiness from an engineer’s perspective.

Despite success in the Dubai stock market, ample material wealth and a full family life, Gawdat struggled with depression for years. Then in 2014, his 21-year-old son died during a routine medical operation.

Gawdat developed what he calls an equation for happiness. Namely, happiness is equal to or greater than the events of your life minus your expectation of how life should be.

During the lecture, Gawdat suggested pragmatic ways to regain and maintain happiness in one’s life.

The session was one of Lotte’s monthly “breakfast forums,” established for senior executives to share and learn new trends in business management and to strengthen ties among the organization’s top tier. Gawdat was invited on Wednesday to speak to 295 executives, including Chairman Shin and Hwang Gak-gyu, the head of Lotte’s strategy planning division.

“The lecture provided me the chance to think about the definition of happiness,” said one executive who attended.

After the lecture, Chairman Shin spoke with Gawdat, expressed his thanks for the lecture and discussed the global industry trend of the fourth industrial revolution.

Gawdat is currently working at Google X, the IT giant’s internal research organization, responsible for some of the company’s most futuristic projects, such as driverless cars, providing internet to remote areas using balloons and delivering consumer goods via automated aircraft.