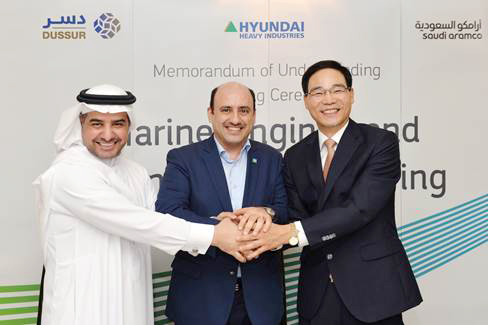 Hyundai Heavy Industries signed a memorandum of understanding with a Saudi joint venture on Tuesday to license its engine production technology, in a bid by the shipbuilder to diversify its revenue sources.

Although Hyundai Heavy has been producing and selling engines on its own, this is the first time the shipbuilder is being paid royalties for its engine production technology.

The Korean company, along with the Saudi national oil company Saudi Aramco and Dussur, a Saudi industrial investment firm, will invest $400 million through 2019 to construct a factory capable of producing about 200 diesel engines per year at the King Salman Global Maritime Industries Complex in the western part of Saudi Arabia. Since Hyundai Heavy owns the original engine-producing technology, the venture will pay royalties to the Korean company.

The engine is a medium-speed four-stroke diesel engine mostly used to power ships and generate electricity. A four-stroke engine employs four pistons and produces fewer exhaust pollutants than a two-stroke engine. Since 2000, Hyundai Heavy has exported the engine to over 40 countries in Latin America, the Middle East and Asia. According to the shipbuilder, it is the best-selling medium-speed marine engine in the world, with a 22 percent market share.

“Engine technology is one of the core technologies utilized in diverse industries including shipbuilding and energy,” a company spokesperson said. “We plan to aggressively expand our engine licensing business to make it one of our future growth engines.”

The joint venture with Saudi Arabian partners gives Hyundai Heavy a launch pad to enter the growing engine power plant market in the Middle East. These plants generate power by using a reciprocating engine running on pistons and an alternator that converts mechanical energy to electrical.