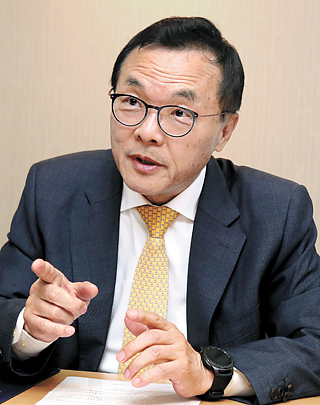 On June 19, President Moon Jae-in declared a “nuclear-free era” during a ceremony that marked the permanent shutdown of Korea’s oldest nuclear reactor, the Kori-1, in Gijang, Busan — thus confirming his intention to reshape an energy policy centered on atomic power. In detail, his plan is to reduce the portion of fossil fuel and nuclear energy, which currently accounts for 70 percent of the entire supply, and increase the combined pie of LNG generation and renewable energy from sunlight and wind turbines to surpass 50 percent by 2030.

But there exist voices of concern. Above all, generating renewable energy is a project that will require a long period before it can take root. If LNG is to be the only substitute for shortened fossil fuel and nuclear energy, electricity price hikes will be inevitable. In other words, renewable energy is expensive.

Two days after Kori-1 was halted, the JoongAng Ilbo sat down with Hwang Joo-ho, professor of nuclear engineering and vice president at Kyung Hee University, to hear his opinion about a desirable energy conversion policy. Hwang was the one who led the group of 230 professors in energy studies from 29 universities nationwide to issue an objection to the nuclear-free policy. Having studied nucleonics at Seoul National University and nuclear engineering at Georgia Tech, he was the first Korean to have obtained a doctorate abroad in radiation and radioactive waste.

Q. What was your impression of Kori-1’s shutdown ceremony on June 19?

A. I was moved to see Korea’s first 40-year-old nuclear plant walk into history. I entered university in 1975 and Kori-1 was completed in 1978. I remember being overwhelmed with hope, thinking “Now Korea has an operating nuclear plant, there’s got to be work for me to do out there.”

In the late 1950s, President Rhee Syngman started building nuclear energy research centers and sent nearly 300 talented students to the United States, following the advice of an American expert. At the time, Korea’s per capita income barely surpassed $100. Kori-1 was the fruit of Rhee and Park Chung Hee administrations’ policies to bring nuclear energy to the country.

Without nuclear plants, the “Miracle on the Han River” would have never been possible, but I believe the history of how Korea’s nuclear energy plants have evolved over the past decades is also a miracle in its own right.

Do you know what it means today to export a nuclear plant? Korea is a leading country in the realm with 25 nuclear power plants. For the last thirty years, our country has constructed Korea-standard nuclear plants along with next-generation nuclear reactors that are much cheaper than foreign ones. It was our competence in pricing and technology that won us the 2009 deal to establish a nuclear power plant in the United Arab Emirates after four rounds against world-leading competitors like France.

The case was a rare one, in which 95 percent of the plant’s components, including core parts like reactor coolant pumps or software for plant design, were all locally made.

People talk about the importance of jobs these days, but the nuclear plant industry produces 100,000 high-quality work positions.

If you oppress this industry, the ecosystem will die and so will these jobs. Talented people will naturally walk away. As the truth behind the Fukushima nuclear plant accident becomes clear, the global market for nuclear power plants is slowly reopening.

[If we stop now,] Korea’s nuclear plants might lose drive as an exporting industry. Exporting plants to another country is incomparable with selling smartphones or cars. As Prometheus gave fire to human beings, Koreans opened the UAE to a new life.

According to the contract, Korea gets to control that country when it comes to nuclear power plants. That kind of relationship will go on for over 100 years. When have we ever had the chance to have control over another country in the past?

In reality, a sense of fear and repulsion against nuclear power plants is widespread, including among environmental organizations.

The dangers of nuclear power plants are often exaggerated. For the last 50 years, more than 580 nuclear power plants were constructed around the world and several accidents have occurred, but zero were caused by an earthquake. Fear of nuclear plants is expanding these days after the recent earthquake near Gyeongju. As you know, what incurred in the Fukushima case was not an earthquake but the tsunami that swept over it. The accident was preventable if only the site had a higher protecting wall. Inherently, the plant itself was not the problem.

The new government says that nuclear-free is the spirit this era calls for. Nuclear plants had advantages, but it’s about time they disappear now that we live in a different generation. This is what they call “Energy democracy.”

It may seem like an expression from the authoritarian era, but as much as energy democracy is important, so is energy security. Democracy can’t stand alone without security. Energy independence is a vital mission for a country that does not produce oil.

Korea’s entire energy industry is uneasy after Saudi Arabia cut ties to Qatar, our biggest gas exporter. The Middle East will always be a powder keg. For a country like us, that has heavy dependence on Middle Eastern oil, energy independence is a desperate thing.

Uranium — nuclear power’s base ingredient — is well-spread across relatively peaceful regions; it’s cheap to store and most nuclear plant facilities can be Korean-made. There is no energy that’s cheaper, more pollution-free or more reliably supplied all at once. We can’t count on renewable energy of the far future.

Are you saying renewable energy is nothing but a mirage?

It’s undeniably a goal we have to move to in order to realize energy independency. But rapidly reducing nuclear plants is a problem. We have to take time to fully communicate with the public and hear what the specialists have to say. The possibility of electricity bills considerably going up needs to be clearly addressed. Energy conversion plans were considered for more than a decade in foreign countries. It’s not something that can be done in a flash.

We have to keep the status quo for some time by opening a new plant after closing an old one, consume gas and oil, while conducting research in renewable energy and expanding its supply. If too much pressure is put on the nuclear plant industry, professionals will leave the country and shutting plants down itself may turn out to be a difficult task. We need to give time for new technology to replace nuclear power plants, which is why for the time being, renewable energy and nuclear energy have to go hand-in-hand.

Where is the midpoint between pro-nuclear and nuclear-free supporters?

Renewable energy is expensive. For one wind turbine of 1-megawatt capacity onshore, 25 trillion won ($21.7 billion) has to be invested. Offshore, the cost elevates to 5 billion won. Even people who install solar batteries on their rooftops are at least owners of a house. Renewable energy is a business for those who can afford it.

On the other end, higher electricity bills will hit ordinary people and mid- and small-sized business operators hardest. If nuclear plants are shut down, the conservative estimate for the electricity price hike is 20 to 30 percent.

According to the current government’s plan, fossil fuels may soon be kicked out of the energy market. Coal is an energy source that still has a lot of remaining reserves.

As an engineer, it’s sad to see a country with zero energy resources decide on a policy to kill [its development] technology in such a short time span.