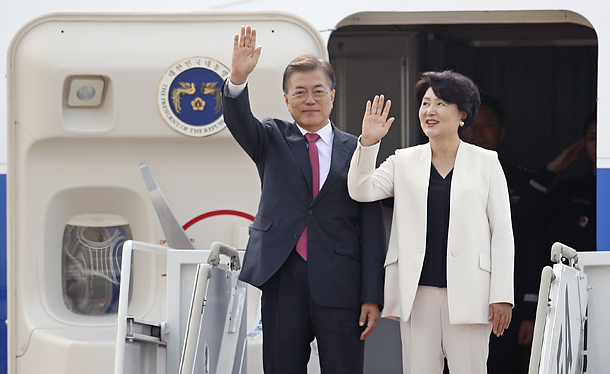 President Moon Jae-in, left, and first lady Kim Jung-sook, right, wave their hands toward officials who came to Seoul Air Base in Seongnam, Gyeonggi, to see them off on Wednesday as they fly to Germany to attend G-20 summit. [YONHAP]

President Moon Jae-in embarked on a six-day trip to Germany on Wednesday, beginning his second overseas trip as president, for a series of summit meetings with his foreign counterparts and the Group of 20 meeting.

Moon looked to be in a more serious mood as he walked toward the plane compared to a week before, when he left for Washington for his summit meeting with U.S. counterpart Donald Trump, likely because of the North’s recent missile test, which was ordered by North Korean leader Kim Jong-un.

“We are in a real crisis, sparked by the North’s missile test,” Moon was quoted as saying by the ruling Democratic Party. “I feel heavy-hearted.”

Pyongyang claimed the day before to have successfully tested an intercontinental ballistic missile (ICBM), which it said could target “any place in the world.”

North Korea said the missile was a Hwasong-14 ICBM, which flew 933 kilometers (579 miles) for 39 minutes and peaked at an altitude of 2,802 kilometers before it landed in the East Sea.

The North said the missile was fired at a high angle, which shortens its travel distance, so that it would not land in neighboring countries.

Both Washington and Seoul confirmed on Wednesday that it was indeed an ICBM, complicating Moon’s efforts to ensure Seoul assumes a central role in addressing Pyongyang’s nuclear and missile programs.

In his summit in Washington with Trump last week, the two sides agreed that South Korea should take a “leading role in fostering an environment for peaceful unification of the Korean Peninsula.” The bilateral agreement by Trump and Moon was understood by the Blue House to mean that Seoul is now in the “driver’s seat” on the North Korean issue.

“After Washington recognized our intention to take a central role [concerning North Korea], we planned to have it also recognized on the multinational diplomatic level [during Moon’s trip],” said a senior Blue House official, “But with the North’s latest, our plan to do so has hit a stumbling block.”

Another Blue House official, speaking on the condition of anonymity, said on Tuesday that Moon’s North Korea policy of engagement “could be subject to a complete overhaul” if the recent test was confirmed to be an ICBM, as it since has been.

Upon landing in Berlin, Moon will have his meeting with German Chancellor Angela Merkel. On Thursday, he is scheduled to take a round of meetings with a dozen foreign leaders, including Chinese President Xi Jinping.