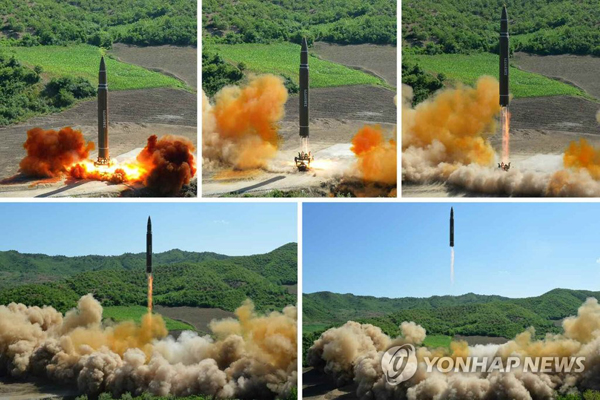 U.S. Secretary of State Rex Tillerson said in a statement Tuesday, Washington time, that his country “strongly condemns North Korea’s launch of an intercontinental ballistic missile,” confirming Pyongyang’s claim that it had conducted its first test of an ICBM.

South Korea’s Ministry of National Defense followed up hours later, saying Wednesday that the projectile was indeed a “new type” of ICBM, possibly a reformed version of a Hwasong-12 intermediate-range ballistic missile.

But the ministry fell short of saying whether the launch was successful, saying it was “hard to confirm” at this stage.

In his statement, Tillerson said, “Testing an ICBM represents a new escalation of the threat to the United States, our allies and partners, the region and the world,” while calling on other countries to take firm action against the North Korean regime.

“Any country that hosts North Korean guest workers, provides any economic or military benefits or fails to fully implement UN Security Council resolutions,” he continued, “is aiding and abetting a dangerous regime.”

Tillerson stressed that Washington seeks only the “peaceful denuclearization” of the Korean Peninsula and that it will “never accept” a nuclear-armed North Korea.

Tillerson’s acknowledgement that it was an ICBM contradicts an earlier statement by the U.S. Pacific Command, who said in a statement shortly after the missile test that the projectile appeared to have been an intermediate-range ballistic missile, a class that has the capacity to fly between 3,000 and 5,500 kilometers (1,864 to 3,418 miles), shorter than an ICBM’s capacity of more than 5,500 kilometers.

On Tuesday afternoon local time, hours after the U.S. Pacific Command made that assessment, North Korea said the missile was a Hwasong-14 ICBM, which flew 933 kilometers for 39 minutes after peaking at an altitude of 2,802 kilometers before landing in the East Sea.

The North said the missile was fired at a high angle, which shortens its travel distance, in order not to land in neighboring countries.

The UN Security Council said in a statement that an urgent meeting on the Hwasong-14 will be held Wednesday in New York. An official said the group was likely to adopt a joint statement condemning North Korea’s missile launch and draft wider sanctions on the regime as soon as possible.

North Korea claimed through the Korean Central News Agency (KCNA), its official mouthpiece, Wednesday that the Hwasong-14 can carry a “large and heavy nuclear warhead” and that the launch from the day before had successfully tested atmospheric re-entry technology, a crucial element of a long-range missile.

An ICBM requires a re-entry vehicle to withstand the intense heat surrounding the nuclear warhead when it arcs through space and re-enters the atmosphere, and to insulate the warhead from the absorbed heat.

Local and U.S. military experts have been dubious whether North Korea actually holds this technology, as it has asserted numerous times before.

The launch was a “gift” to Americans for their Fourth of July celebration, the North said in its KCNA report.

The training was said to have been directly ordered by President Moon Jae-in, who proposed the idea to U.S. President Donald Trump through their national security advisors, according to Blue House officials. Trump was quoted as saying he thought highly of Moon’s decision and agreed to it.