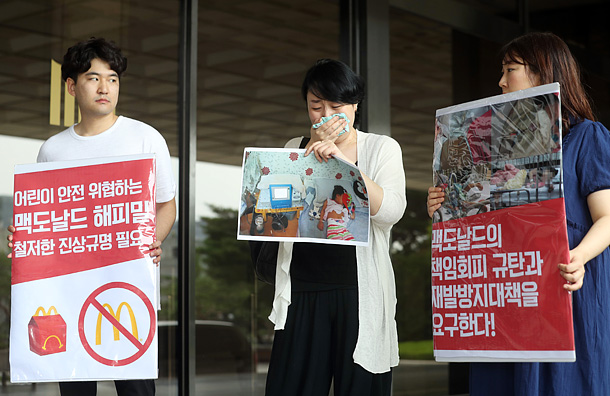 The mother, center, of a girl who has hemolytic-uremic syndrome (HUS), weeps at a press briefing in Seoul on Wednesday as she talks about her 4-year-old daughter, whom she claimed was diagnosed with HUS, a food-borne disease that mostly results in acute kidney failure, after eating a burger that was served with undercooked meat at a McDonald’s store in Pyeongtaek, Gyeonggi, in September. The girl’s parents filed a criminal complaint earlier that day with the Seoul Central District Prosecutors’ Office to investigate McDonald’s Korea on charges of violating the food safety law. About 8 percent of those diagnosed with HUS have lifelong complications as a result. [YONHAP]