A Kia Tigers’ groundskeeper sprays water on the field before a game. [YONHAP, JOONGANG PHOTO]

The Kia Tigers’ winning streak, which started on June 27 against the Samsung Lions, has finally come to an end on Wednesday with a 18-17 loss to the SK Wyverns.

Though the Tigers’ concluded a seven game winning streak, the record they set is far more impressive. After defeating the Wyverns 15-6 on Tuesday, the Tigers became the first team in Korea Baseball Organization (KBO) history to win with more than 10 runs for seven consecutive games.

In fact, this is a record that has never been matched in Major League Baseball or Nippon Professional Baseball. During the streak the Tigers scored a total of 94 runs from 119 hits, an average of 13.4 runs per game.

The Tigers weren’t the only team clocking up runs as the season moved into July. In a total of 13 games as of Tuesday, the ten KBO clubs hit at an average of 2.67 home runs and recorded a 0.303 batting average. Meanwhile, the pitchers’ ERA skyrocketed to 6.14. 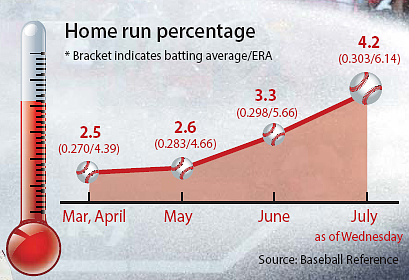 At the beginning of the season, the pitchers were at an advantage as batters adapted to a newly enlarged strike zone. But with the weather getting warmer the batters are starting to warm up, and the home run percentage has increased to 4.15 percent from 2.49 percent in April.

Normally, pitchers tend to perform weaker in the summer, whereas batters improve as they play more games. With the rise in temperature, the starting pitchers start to fall and the relief pitchers show less power in their pitches.

In April there were five pitchers’ with an ERA below 2.00. Now there are none. Looking at all five KBO games played on June 18, the teams scored a total of 95 runs, the most runs ever scored in a single day in KBO history. The NC Dinos scored 11 runs, but still lost to the Doosan Bears with 13.

In “The Physics of Baseball,” Sterling Professor Emeritus of Physics at Yale University Robert Adair writes that if the temperature rises by five degrees Celsius, the driving distance of a hit also increases by 1.2 meters (4 feet). Once the temperature rises, the air density decreases, so the baseball encounters less friction from the air.

Atmospheric pressure and humidity are important factors in baseball, as they have a direct relationship with temperature. If the humidity increases the air density decreases, which increases the possibility of a long hit, as there is less air pressure surrounding the baseball.

According to KBO analysis, if the temperature increases by 10 degrees Celsius, the slugging average also increases by 12.6 percent.

Up until the 1960s the major league started around April 19. But as the number of games increased, the season opener was pushed back to the beginning of April. Since the weather varies a lot in each state, each club considers the climate when it comes to recruiting players.