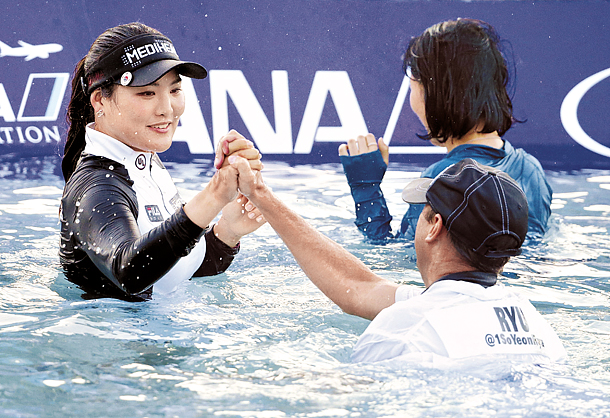 Ryu So-yeon, the world’s top golfer, issued an apology on Wednesday regarding her father’s unpaid taxes and rude behavior in public.

According to Seoul tax authorities, Ryu’s father has not paid taxes while living in a luxurious house bought under Ryu’s name. In addition, when the tax investigator urged her father to pay, he threatened the investigator.

The amount of overdue taxes in question totals 316 million won ($272,996). When the tax investigator sent a text saying “thank you,” Ryu’s father replied with abusive language, which was later released to the public.

This isn’t the first time a professional golfer has apologized for their father’s unethical behavior. Kim Hae-rym, who plays on the KLPGA tour, also issued a statement for her father’s violence towards her manager on a golf course. In yet another incident on the LPGA tour, a player’s father attempted to hit a caddie with a stick.

Much of the heat is being directed at the players themselves, who are receiving a large amount of negative comments online, while others have said players shouldn’t be held responsible for the faults of their family members.

It was also recently discovered that Ryu had continuously asked her father to pay his taxes with her money, but he had refused to do so because, he told her, he wasn’t going to pay it all at once but intended to pay it in installments, which he never did.

“It’s not that I didn’t pay for the past 16 years,” said Ryu’s father. “It’s just that the due date for my taxes had already passed.”

But in fact, he didn’t pay any taxes during those 16 years.

This is not the first, and will not be the last time, a father caused trouble for their pro golfer child. Some feel Korean golf would be improved if players did not have to apologize for others actions.