Aging will slow growth to 0.4%

Aging will slow growth to 0.4% 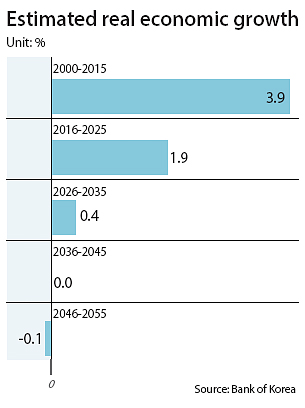 The country’s aging population will push down real economic growth to as low as 0.4 percent in ten years from the current level of 3.9 percent, according to a report released by the Bank of Korea on Thursday.

The somber forecast is yet another warning sign for Korea, where the population of people over 65 is one of the fastest growing in the world.

This drastic result is attributed to the reduction of working people and productivity, smaller disposable income among older adults and subsequent spending habits that lead to lower domestic consumption.

“The economic impact of the aging population in Korea is significant because aging takes place at a faster rate,” the report said. “Older adults also cut their spending right after retirement, a pattern often seen in emerging countries.”

To ease the effect of its rapidly aging public, the bank suggested a delay of the retirement age and inclusion of more women in the working force.

If the retirement age increases by five years, it can result in a 0.4 percent rise in the GDP over ten years and a 0.2 percent increase over twenty years.

Korea’s retirement age is already the second highest in the world at 70.45, yet the poverty rate among its older adults is the highest among OECD member countries, with almost half of senior citizens in poverty. Many of those in their 40s and 50s are pushed out of their jobs at conglomerates and resort to manual labor or self-employment.

Also, if the proportion of women in the workforce increases to the OECD average of 66.8 percent from the current level of 57.4 percent, this will translate into a 0.3 to 0.4 percent rise in the GDP over 20 years.

The study also called on the government to devise incentives aimed at increasing the fertility rate as well as promoting immigration.

“The government should contemplate how it can increase the fertility rate among those aged between 25 and 38,” it noted.

“In the case of other countries, the influx of immigrants proved to be an effective way to ease the problem of an aging society. But a careful approach is required since it can increase tension as seen in the European countries.”

The study predicted the inclusion of 2 million immigrants for less-skilled jobs will increase the GDP by 0.1 percent. According to Statistics Korea last year, the number of senior citizens aged 65 or older accounted for 13.1 percent of Korea’s total population of 50 million.