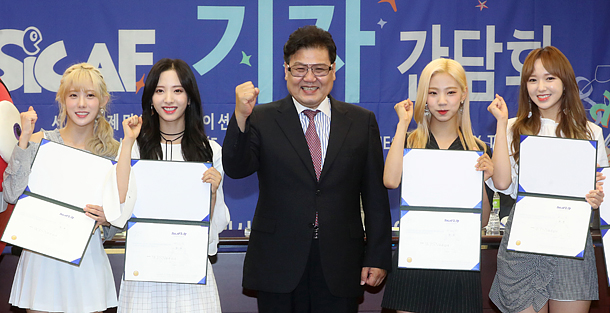 Members of girl group WJSN and Kim Yeong-du, the organizing committee chief of Sicaf, attend a press conference on Wednesday ahead of the festival’s opening. [YONHAP]

The upcoming Seoul International Cartoon & Animation Festival (Sicaf) will cater to people of all ages.

“Under the theme of adventure, the 21st edition of Sicaf has aimed to highlight a number of [animated content that] people from around the world [can enjoy],” said executive operating officer Lee Jong-han Wednesday during a press event held in central Seoul. “We are going to make use of diverse content like webtoons and [experience based on technologies like] virtual reality and augmented reality.”

“Loving Vincent,” a fully painted animated film produced in Poland and the United Kingdom, will open the festival, scheduled to kick off during the last week of this month. Written and directed by Dorota Kobiela and Hugh Welchman, it tells the story of painter Vincent van Gogh.

“It is an animated film created out of 56,000 fully-painted pieces. We have [been in contact with] Poland since the beginning of this year in order to invite the film to our festival,” said Sicaf’s programmer Cho In-beom. “Director Dorota Kobiela promised to visit Korea and enjoy the four-day festival.”

Cho added that Japanese voice actor Junta Terashima will also make a visit to meet Korean fans during the festival. Terashima recently provided the voice for the character Shin Ichijo in the popular Japanese animation “King of Prism: Pride the Hero.”

Some 2,550 works from 97 countries applied to be part of this year’s Sicaf, and a total of 230 have been invited to compete.

Sponsored by the Ministry of Culture, Sports and Tourism and the Korea Tourism Organization, Sicaf is a showcase of animation, cartoons and related art genres held annually in Seoul. It began in 1997.