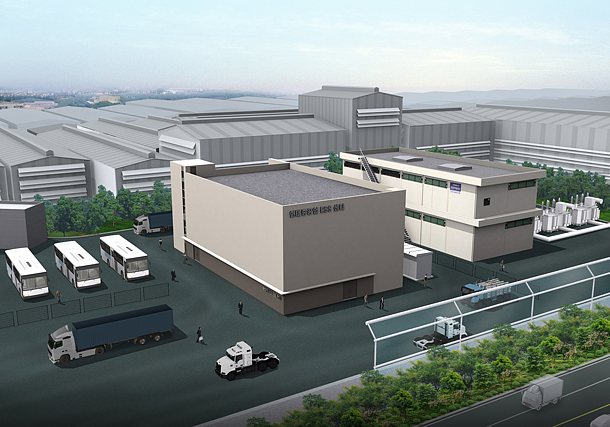 A computer-generated image of the energy storage system that Hyundai Electric plans to build in Ulsan. [HYUNDAI ELECTRIC]

The facility will be able to hold 50 megawatt-hours of electricity, enough to supply power to 15,000 people a day, according to the company. Hyundai Electric plans to complete the facility in October with an investment of 24.6 billion won ($21.3 million).

Energy storage systems are like giant batteries that store electricity and dispense power when needed, greatly enhancing efficiency. Before the ability to store electricity, power generators had to control supply based on demand forecasts that sometimes missed the mark.

The facility in Ulsan is a joint project that includes participation from two Hyundai affiliates, the Ulsan regional government and Kepco Energy Solution, a division of the national electric power company.

Hyundai Electric spun off from a division of Hyundai Heavy Industries in April and has been focusing on developing energy management systems. Among many sectors in the industry, energy storage systems are considered a high-potential area for growth as renewable energy from sunlight and wind gain traction. Such systems can help level supply by storing captured energy during times of low demand.

The Korean government wants to double the size of the local energy storage system market from 300 billion won to 600 billion by 2020. Part of the initiative includes requiring new government office buildings to come with such systems starting this year.

The global market for energy storage systems is forecast to grow from $2.6 billion this year to $5.5 billion by 2021 at an average rate of 20 percent per year, according to data from consulting firm Navigant and the Ministry of Trade, Industry and Energy.