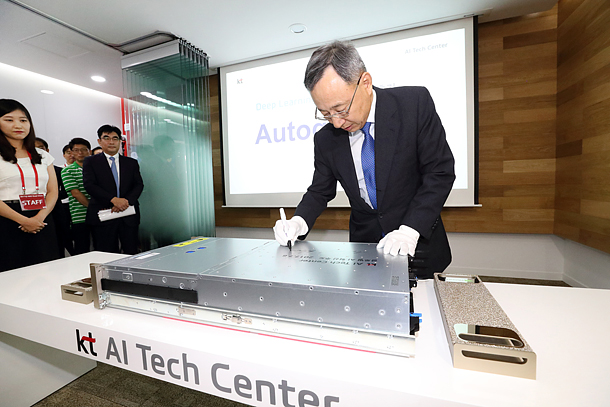 KT, the country’s second-largest mobile carrier, launched a research center devoted to artificial intelligence on Thursday as it seeks to upgrade the quality of its services and find future growth drivers.

The AI Tech Center will serve as an open platform that will allow the telecom operator to work together with its business partners and other tech developers on the back of Korea’s fifth-most capable super computer, which enables bullet-fast calculation and deep learning.

“We concluded attracting as many partners as possible to cooperate on improving AI algorithms would be a better option than developing AI on our own,” said a KT spokesman. “We also expect a synergy effect from sharing ideas on which service to launch with the AI technologies.”

KT followed the example of Mirae Asset Daewoo, a local brokerage house, which signed a memorandum of understanding in April to take advantage of KT’s Giga Genie, a voice command-based AI set-top box-speaker, to allow users to check stock prices and ask for recommendations on which stocks to buy.

The wireless operator is also seeking to attract local start-ups that could contribute to beefing up AI technologies and to develop related devices, according to the spokesman.

The Giga Genie division, under the marketing strategy headquarters, is responsible for marketing as well as developing new services and exploring partnership opportunities.

KT is a latecomer to AI. SK Telecom rolled out its Nugu speaker in September last year and launched an AI business unit under the direct supervision of its CEO.

SK Telecom is stronger on connected home and connected car technology, as well as augmented reality and virtual reality on the back of next-generation 5G connectivity.

KT’s focus lies in media, security and networks, although it has yet to come up with clear goals. The company differs from SK Telecom in that it encourages more active participation of third parties when it comes to AI. Both companies are also competing to secure the leadership role in the standardization and commercialization of 5G, the successor to the current long-term evolution 4G.

LG U+, the smallest mobile operator, installed an AI service business division at the end of last year and is scrambling to unveil its own AI speaker, expected this fall at the earliest.

Housed inside KT Institute of Convergence Technology in Umyeon-dong, Seocho District, southern Seoul, the different divisions of the AI Tech Center are spread out across several different floors depending on purpose.

The company currently has some 130 AI experts and aims to recruit 50 more by the end of this year.