Switching directors can lead to ‘Real’ disaster: Major film projects that have seen a change at the top during production have rarely succeeded

Switching directors can lead to ‘Real’ disaster: Major film projects that have seen a change at the top during production have rarely succeeded

Bucking expectations, the recently released action flick “Real” failed to please audiences and was criticized for its “low cinematic quality” when it opened in theaters last week. People are pointing fingers at rookie director Lee Sa-rang for the film’s quality. Though Lee has no experience directing a movie, and initially joined “Real” as a producer, he replaced the original director-writer Lee Jeong-seop to carry the flick that cost more than 11.5 billion won ($10.3 million) to make.

“Real,” starring mega-star Kim Soo-hyun and singer-turned-actress Sulli, is not the first disappointment among movies whose directors have changed at some point during filming. Since 2010, seven local films saw their directors replaced in the movie-making process, including “The Tooth and the Nail” (2017) and “The Hunt” (2016). And among those seven, only two - “The Target” (2014) and “Secretly, Greatly” (2013) - managed to exceed their break-even points.

“It is very rare for a movie to replace a director in the middle of the movie-making process because it entails too much risk, especially financial risk,” said a film producer who requested not to be named.

“There can be a number of reasons behind the [inevitable] decision. First is a conflict between producer and director, derived from creative differences. A second reason could be due to lack of director’s abilities. Also, a conflict derived from personality differences between filmmaker and producer, staff or actors could leave the director exiting the project.”

“Honestly, it’s not easy to change a director in the middle of the movie-making process. Changing a director means there’s a problem.”

The case of “Real” seems to be even more unusual, as the news regarding its director’s replacement erupted while the film was in the editing process. While Jeong-seop did most of the shooting, Sa-rang was responsible for shooting supplementary footage and editing.

“There was no strict line on who does what as a director or producer,” Sa-rang told reporters during the press preview held last week. “We worked together, but encountered differences in opinions and both of us had strong characters. So we thought it would be better for one person to lead the movie with a single personality.”

Despite this explanation, the controversy deepened when Sa-rang was revealed to be the cousin of the main cast member Kim Soo-hyun. Following harsh criticism, it seems unlikely for the movie to reach its break-event point of selling 3.3 million tickets. The film, backed by Chinese giant Alibaba Pictures, has sold 426,000 tickets as of Wednesday. 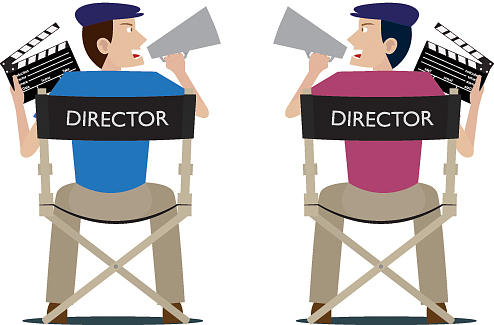 Amid such controversy, the upcoming “Um Bok-dong” (working title), produced by actor Lee Beom-soo and starring singer-turned-actor Rain, generated buzz when its director Kim Yu-sung was revealed to have stepped down after a conflict with the production crew. A source from the film’s production company said that “Kim voluntarily stepped down in the middle of production, as he felt pressured to carry a 10 billion won movie.”

The original director for “Miss Conspirator,” Jung Bum-shik, was replaced by Park Cheol-gwan due to health reasons after around 30 percent of the movie was shot. Similarly, filmmaker Park Sin-woo worked on almost one third of “Commitment” before he was replaced by assistant director Park Hong-su. After director Lee Myeong-se left “The Spy: Undercover Operation,” due to creative differences between Lee and JK Film, a production company well-known for pursuing commercial movies, director Lee Seung-jun was added to the project.

There are, however, a few cases that managed to win the hearts of the audience even after the original director had been replaced. Kim Soo-hyun’s previous movie “Secretly, Greatly” sold 6.95 million tickets, which was more than three times above its break-even point (2.2 million) despite being completed by a different director than had been announced at the beginning of the project.

“The Target” (2014) not only sold more admissions than its break-even point, but it managed to make its international premiere at Cannes Film Festival. Its break-even point was 1.8 million tickets, and the film went on to sell 2.84 million.

An important commonality that these two successful movies share is that the initial director of both films had stepped down before shooting began.

Replacing a director almost always affects the quality of a movie, according to film critic Kim Hyeong-seok.

“The two most crucial factors that make up a good movie are consistency and homogeneity, and if two people work on a single movie, the balance breaks down,” Kim said.

“There are hardly any good films whose director had been replaced in the middle of movie-making process.”